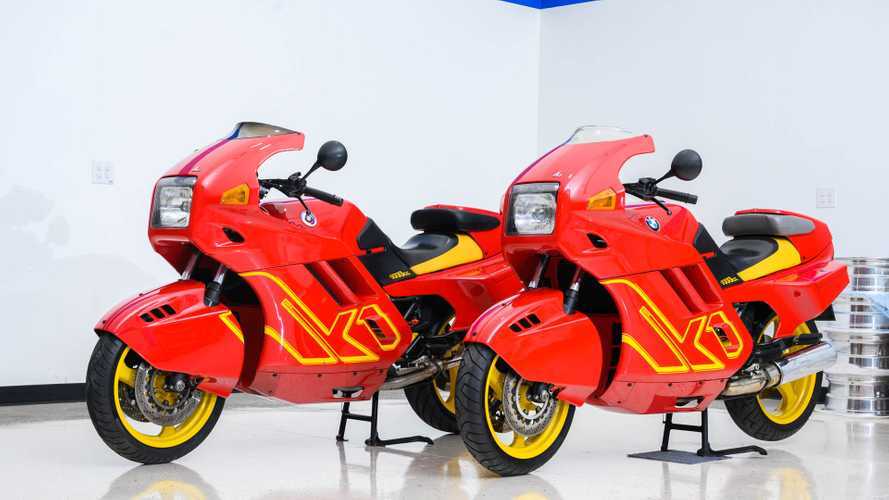 Buy one for riding, one to display.

It’s getting harder to find a vintage BMW in good shape these days. These machines were usually ridden hard for long miles. Many surviving Beemers are snapped up by short-sighted custom builders and hacked into oblivion, simply because of their odd-looking engines. Then, something like this happens: Bring a Trailer has not one, but two 1990 BMW K1s for sale. They’re not identical, but they’re a close match.

This was one of BMW’s revolutionary K bikes, a line that started in the 1980s when the company decided to move away from its usual flat twins and build modern engine designs. First up, the 1,000cc K100 hit the market in 1983 with a Renault-derived, inline-four engine. It was a bold change in direction, with the cylinders arranged longitudinally under the frame, instead of across the frame, like the Japanese bikes. In 1988, the K1 came along, as an evolutionary descendant of the K100.

What About A Modified K100?

This K100 Will Change How You Look At CVT Motorcycles
⠀

Watch This K100 Street Tracker Get Designed Before Your Eyes

The K1 was supposed to be BMW’s response to the new Japanese superbikes of the late 1980s. The K100 had an eight-valve head; it was much more modern than BMW’s boxer engines, but still stodgy when you compared it to something like a Kawasaki GPZ900R. When it made the K1, BMW bumped up the liquid-cooled four-cylinder's compression, lightened the con rods and the crank, and added a 16-valve head. The result was supposedly BMW’s first 100-horsepower engine, making a claimed 100 horsepower and 74 ft-lbs. of torque.

To complete the superbike image, BMW added lots of weird bodywork (engineered to minimize drag), with gaudy paint. The K1 had ABS and a shaft drive, which none of the competition had at that time. This was also BMW’s first machine with the Paralever rear suspension system, aimed at reducing handling issues from the shaft drive. Add it all up, and you got a claimed 150 mph top speed.

Unfortunately for BMW, the K1 was a sales flop, partly because it wasn’t built for touring. It failed to impress existing Beemerphiles, and didn’t attract many new customers. You rarely see a K1 in the wild, and it’s extremely rare see two matchy-matchy bikes for sale (one runs, one doesn’t, says Bring a Trailer).

One of the machines has 16,000 miles on the odometer, and the other has 29,000 miles. One’s been customized with a tinted windscreen and Luftmeister muffler, but for the most part, these bikes don’t appear to have been tinkered with much. That’s a rare situation these days, and it makes these machines all the more desirable for a collector—especially a collector who might want one bike to ride, and the other to display.