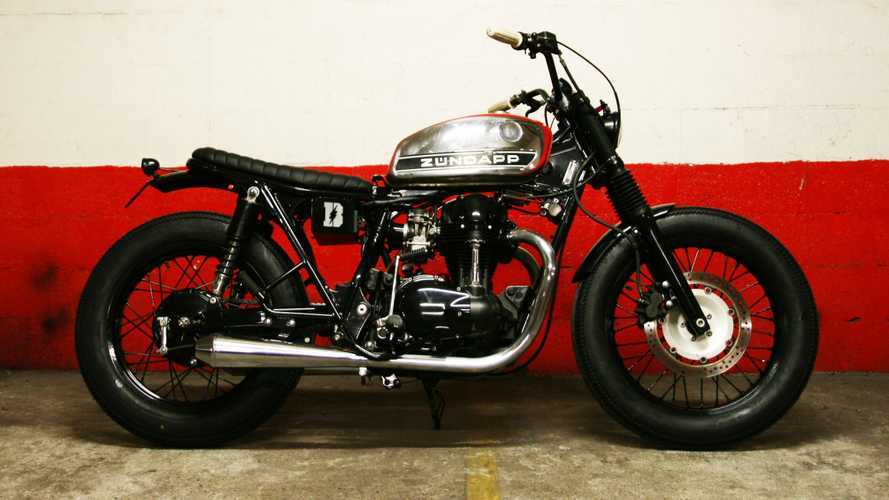 A fitting homage for a motorcycle living but in memory.

To many motorcycle enthusiasts of today, the name Zundapp probably doesn’t mean anything. Very few people ever knew of the rather obscure German motorcycle manufacturer. Arriving quite late to the game in 1917, Zundapp was left behind by its competition, and never quite made it into the ranks of other more popular motorcycle manufacturers. Eventually, it was forced out of business, and declared bankruptcy in 1984.

Despite the brand’s rather lackluster performance in the course of its lifetime, it nonetheless gained a few followers who would go to great lengths to preserve the brand’s memory. This is exactly what the folks at Blitz Motorcycles, a Paris based custom garage, have done with their latest creation.

Starting life as a 2001 Kawasaki W 650, this bike has been transformed inside and out. They’ve even gone as far as changing the name of the bike. It’s no longer just a custom Kawasaki W 650. No, this bike is the Kawasaki Zundapp. Commissioned by a customer who had a keen fondness for Zundapp bikes, particularly the KS from the 1930s, the W 650 was stripped and transformed to pay homage to his favorite motorcycle.

Perhaps the most defining feature of the Kawasaki Zundapp would have to be the original Zundapp KS fuel tank. The team at Blitz Motorcycles took pride in this rare find, and installed it onto the bike without so much as a new coat of paint. Of course, to preserve the memory and heritage of the original motorcycle.

Other modifications include a shortened frame, reduced front end ride height, and a complete engine rebuild to ensure the Kawasaki Zundapp could be in service for many years to come. A new chain completed the drivetrain refresh, and handlebars sourced from what appears to be a  old Triumph Bonneville have been retrofitted to the bike.

Indeed, this is a very personal build—not something meant to please everyone. But rather, a machine meant to keep an individual’s passion burning brightly. A machine meant to embody the very essence of motorcycling to one person. What motorcycle would you consider as the bike that made you the rider you are today?