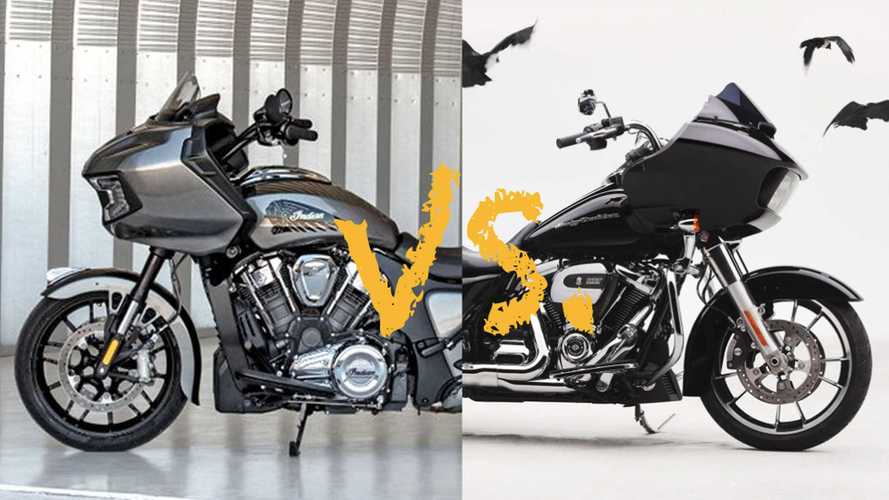 Battle of the big bore baggers.

Whether you like big touring bikes or not, there really is very little that compares to the level of comfort and features they have to offer. It’s no wonder, then, that the competition is so aggressive in the segment, especially between American manufacturers.

In October 2019, Indian introduced its most powerful V-twin yet—the aptly named PowerPlus—alongside the first model to use the engine, the equally new Challenger bagger. More recently, the manufacturer made it crystal clear that it was going after Harley-Davidson's crown in the segment with a Challenger versus Road Glide challenge marketing campaign. Cocky? Absolutely. Legitimate? Definitely. Since Indian decided to openly go after The Motor Company, we wanted to have a look at how the two models compare on paper. This week’s spec showdown opposes the rookie 2020 Indian Challenger and the veteran 2020 Harley-Davidson Road Glide.

Without Bells And Whistles, The 2020 Indian Challenger Now Available
⠀

Both the Indian Challenger and Harley-Davidson Road Glide are bikes designed for road trips, so the engine performance numbers aren’t as important as how far they can get you. The Road Glide might feel slightly heavier during acceleration since it’s physically heavier than the Indian and produces slightly less torque—but it reaches its peak torque faster than the Challenger at 3,250rpm versus 3,800rpm.

Each bike has a 31-degree lean angle (only on the right for the Harley; it’s limited to 29 degrees on the left due to the primary drive), and have close rake angles (26 degrees on the Harley and 25 degrees on the Indian) which means that the handling should feel similar.

Now for range. Exactly how far will each bike get you? Here’s the information we have. Harley estimates that the Road Glide’s city and highway combined fuel economy rating hovers around 45 mpg. Considering its fuel tank has a 6-gallon capacity, this means you should be able to get somewhere around 270 miles out of your Harley—maybe even more if you spend more time on the highway. Harley’s pretty serious about its model’s touring abilities.

For the Challenger, Indian hasn’t released any official fuel economy numbers. Several owners shared on Indian Challenger-dedicated forums that their real-life numbers averaged somewhere around 41 mpg which should equate to a range of roughly 245 miles.

Keep in mind that manufacturers ratings tend to be slightly optimistic. On paper, the Harley comfortably beats the Indian in terms of range. In real life, however, there’s a chance the numbers are closer.

When you hit the road with the intention of getting as far away from your starting point as possible, you ideally also want to be comfortable doing it, especially if you put the money toward a big American bagger. The two competitors have a lot to offer in that way so let’s have a look at all the features they have.

For starters, both the Indian and the Harley come with a standard set of hard cases that are very close in size. The Indian’s luggage offers an 18-gallon capacity between the two cases while the Road Glide is rated at 2.3 cu.ft. (or 17 gallons).

The Challenger is equipped with standard cruise control, three ride modes (Rain, Standard, and Sport), and a 7-inch display with Bluetooth connectivity, as well as adjustable vents and windscreen. The Road Glide also comes with standard cruise control and the Boom Box GTS infotainment system with Bluetooth connectivity but there is no mention of an adjustable fairing. Navigation is an available option on both models.

Both manufacturers offer proprietary apps to sync a smartphone with their infotainment system. For Indian, the app is called "Indian Ride Command" and for Harley, it's simply called "Harley-Davison". Both can be downloaded on Apple and Android phones.

In terms of audio features that allow you to rock on even at highway speeds, the Harley features two speakers while the Indian is equipped with two speakers and two tweeters.

Ergonomics-wise, the Harley is slightly taller with a seat height of 27.4 inches versus the Challenger’s 26.5, but both are still low enough to be accessible to a wide range of riders. Comfort-oriented components available on both bikes include rounded saddles and floorboards instead of foot pegs. The Challenger has a straighter handlebar while the Harley features a buckhorn bar, that curves the grips toward the rider for a closer, narrower reach.

Beyond the numbers, the two models are also priced similarly. The entry-level Indian Challenger ($21,999) comes in $300 above the base Harley-Davidson Road Glide ($21,699) for a similar menu of standard equipment and accessories. The tables turn when you go up in the range, with the Challenger Dark Horse and Limited priced at $27,499 and $27,999 respectively and the Road Glide Special and Limited starting at $27,299 and $28,299 respectively.

The price difference between the models is minimal. Picking between the two all comes down to whether you want to rely on a proven formula (the Harley-Davidson Road Glide) or give a new formula a shot (the Indian Challenger). Both bikes have a lot of similarities though the Challenger is starting to get a reputation for being peppier than its Milwaukee counterpart based on reviews.

Should performance weigh in the balance and your heart is set on a Harley but you’d like your Road Glide to have even more pep in its pep, there’s also a CVO Road Glide armed with the Milwaukee-Eight 117 rated at 126 lb-ft of torque and priced at $40,999—Indian doesn’t offer a high-po equivalent.

Ultimately, the only efficient way of choosing one or the other is to take them both out for a ride to see which one matches your riding style better.