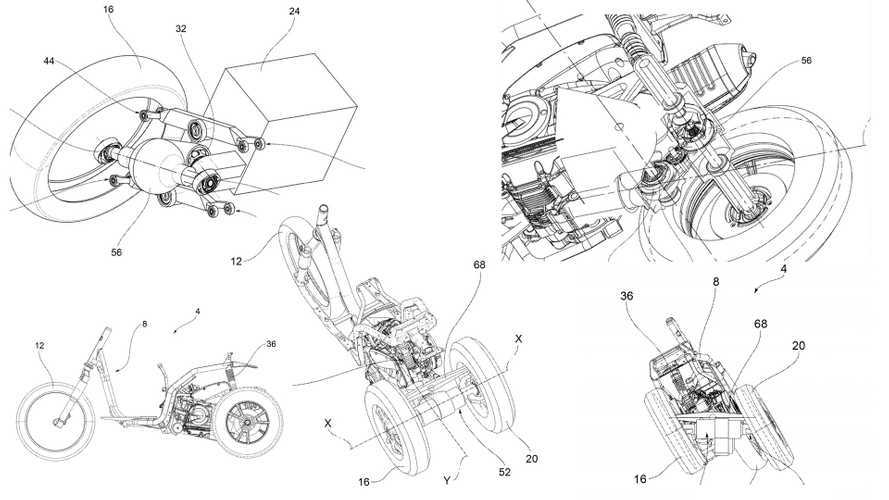 Think MP3, but with two wheels in back.

Romeo loved Juliet, and Piaggio loves leaning three-wheeler designs—and it wants to keep the relationship spicy. A new patent shows the company has designs for a leaner with two wheels in back, instead of the dual front wheel design, as found on the current Piaggio MP3 model.

For the past few years, three-wheeler design has settled into two design threads—wheels forward and wheels aft. Harley-Davidson's built the latter type of machine for decades (currently, it’s got the Freewheeler and Tri Glide Ultra in this configuration), and this is a common custom conversion for Gold Wings and other luxury bikes. The trouble is, most machines with this layout won’t lean through the corners like a two-wheeled motorcycle, and while they’re stable at a stop, they can be tricky for high-speed cornering.

Then there’s the former, more modern layout, with two wheels in front (also called reverse trikes). Some trikes with this design don’t lean (Can Am’s Spyder and Ryker, for instance). However, the Yamaha Niken and Tri-City, as well as Piaggio’s own MP3 models, were built to lean into corners the same way as a standard motorcycle. Some riders find this is more fun to ride, as it basically turns your three-wheeler into a bike with tons of front-end grip.

Other riders think the two-wheeled front ends look goofy, though, or prefer having standard trike layout for other reasons. That’s why Piaggio is working on a new design which has two wheels in back, but still offers leaning capability.

The secret to the system? A trick powertrain and suspension which allows the engine, rear wheels, and front end of the bike to lean, but keeps the solid rear axle parallel to the ground. CV joints transmit power from the solid axle to the leaning wheels. It all looks very complicated in the patent drawings, but also looks like it should provide fun handling. Certainly better than leaning conventional trike designs from the past, at any rate. For buyers who want a leaning three-wheeler, but also want it to look good, this could be the future. If you want more details on the designt, try to decipher the patent here.