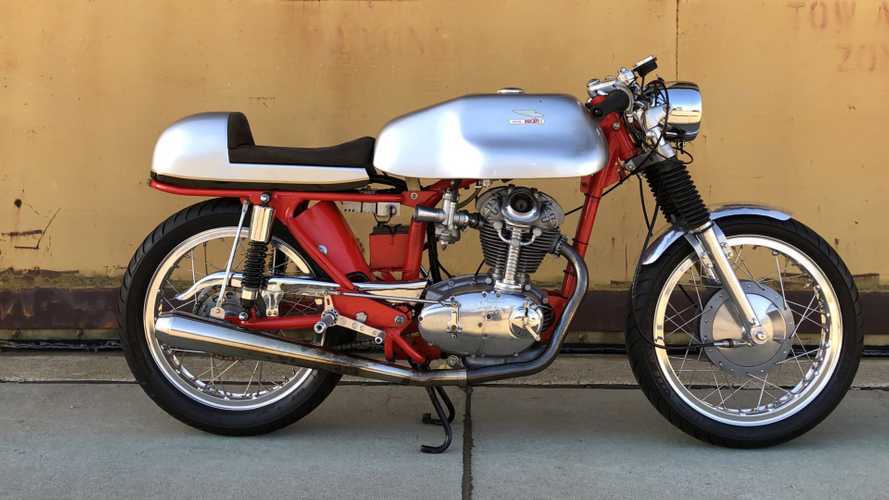 If you want a (mostly) period-correct café racer with decades of service records, a massive list of upgrades, and aesthetics that don’t scream “home builder hack job,” now’s your chance. Bring a Trailer is auctioning off an absolutely gorgeous 1962 Ducati Daytona 250, and it looks like a once-in-a-lifetime bike.

Launched at the Milan Fair in April, 1961, the Daytona 250 is powered by one of Ducati’s “narrow case” engines—an air-cooled, single-cylinder, 249cc mill that makes around 28 horsepower. The advert says this bike’s engine was tuned up for more performance when it was rebuilt; it has a 30mm Dell’Orto carb, a stainless exhaust, a Dyna ignition booster, and Dr. Desmo Gear Gazer with a lens showing the top end bevel drive. This design has a wet clutch and a five-speed gearbox.

This Kit Turns The Continental GT650 Into A Proper Cafe Racer

This particular Daytona has an Airtech fiberglass fuel tank and tail section, painted metallic silver. The front fender is hand-built from aluminum. The headlight has an MV Agusta lens with halogen H4 bulb, and there’s an LED taillight on the rear subframe. There’s also a USB charging port under the seat, so this bike isn’t all old-school.

Most of the parts are from proper performance outlets, though. The wheel hubs are Ducati-made, but the aluminum rims are built by Borrani. The fork and triple trees are from Metal Profiles, and the shocks came from Hagon. This machine has Tommasselli clip-on handlebars and Matador levers, a SuperPractic throttle, Barleycorn Engineering rear-set foot pegs, a Speedhut tachometer. At some point, somebody changed the machine to a GP-shift pattern (one gear up, four gears down—but the ad says you can switch it back to standard one down, four up).

The ad says the odometer reads 4,000 miles, and that the bike was raced in the U.K. before coming to the U.S. The odometer reading is probably incorrect, and either way, it’s been ridden hard. It also appears to be well set-up, and properly taken care of. How often do you get a chance to buy a café racer that was actually raced? This is exactly the kind of machine that the Euro go-fast boys were flogging about in the U.K. and on the Continent in the 1960s and 1970s, and if the price stays reasonable for the remainder of the auction, this machine could be a real deal.