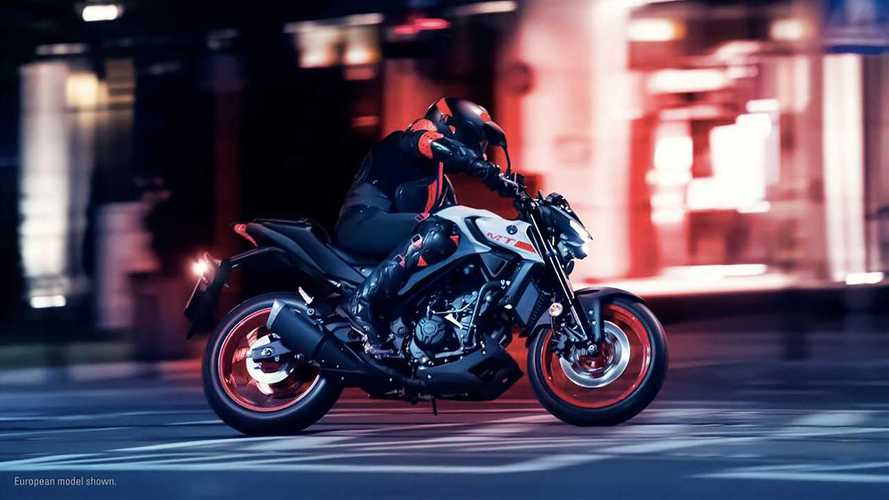 In 2017, Yamaha announced that it would change the name of its North American streetfighter lineup for the 2018 model-year. The FZ-07, 09, and 10 became the Masters of Torque—MT for short. The naming convention was already used in Europe and Yamaha decided to import it to the U.S. to standardize the nomenclature and create a stronger sense of “global community”.

The rebranding gave the company an excuse to update its streetfighter lineup with an upgraded design and a new set of features.  After working through its big and mid-size models, Yamaha decided that the smallest MTs of them all also deserved an update. In October 2019, Team Blue unveiled the new generation of the R3’s new naked alter-ego, the MT-03. Even better: along with a new generation, the manufacturer confirmed that the model would finally cross the pond to become available in North America.  We take a look at everything we know about the new 2020 Yamaha MT-03.

When Yamaha launched the new and improved YZF-R3 at the beginning of 2019, the baby Team Blue bike was very well received. Not even my cold, 300-unfriendly heart was immune to its charms. The R3 became proof that a small bike doesn’t have to feel and ride like one. The introduction of the new MT-03 built on the same upgraded underpinnings that make the R3 so good made the European export even more exciting.

For 2020, the MT-03 receives a more aggressive look. The single headlight cluster is replaced by an almost alien-looking three-part cluster. The side panels decorating the fuel tank have also been updated with more angular components to give the mode a true Master of Torque look. A taller, standard handlebar replaces the R3’s clip-ons which allows the rider to adopt a more relaxed position on the MT. The 30.7-inch seat makes the bike easy to get on both literally and figuratively.

Under the sheet metal (and plastic), the MT is built on a diamond-type tubular steel frame designed to make the both bike rigid and agile. The engine is used as a stressed member which allowed the manufacturer to keep the weight of the bike relatively low—it tips the scales at a tiny 373 pounds.

The chassis is supported by a 37mm, non-adjustable KYB inverted fork at the front and a 7-step preload-adjustable KYB shock at the back. The 17-inch Y-spoke cast-aluminum wheels are clad in Dunlop Sportmax GPR-300 tires. Stopping power is provided by a 298mm disc with Akebono caliper at the front and a 220mm disc at the back. The ABS is a standard feature.

Speaking of the engine, the MT-03 shares the R3’s 321cc, parallel-twin block, paired with a six-speed transmission. While Yamaha doesn’t provide official power figures for the MT, certain sources suggest it produces somewhere around 41 horsepower.

Inside the cockpit, the MT receives a simple, straightforward LCD instrument cluster. While the bike’s equipment is rather modest—we are looking at an entry-level bike after all—Yamaha offers a collection of accessories to up the MT’s ante including a short windscreen, a radiator guard, an engine cover set, luggage, and more. MSRP for the 2020 Yamaha MT-03 starts at $4,599 and the model is now available in Yamaha dealers in the U.S.