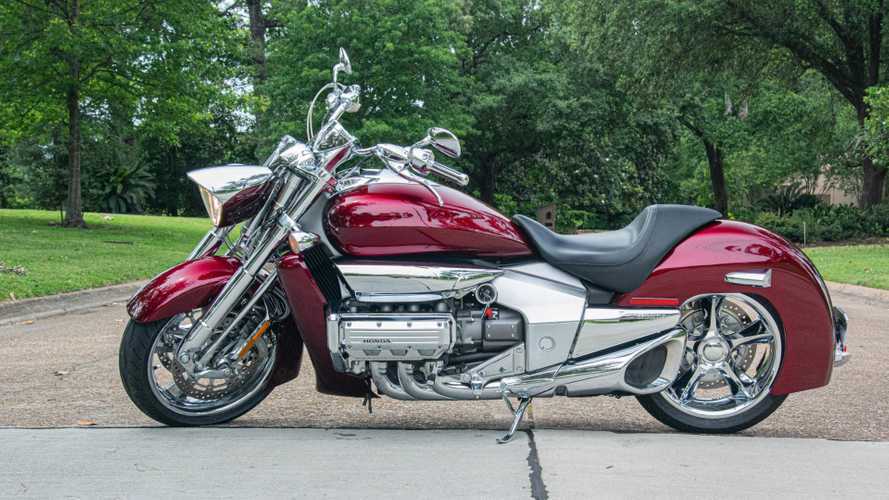 Remember when you didn't meet the Nicest People on a Honda?

The Honda Rune is a weird bike. It’s the perfect encapsulation of the early 2000s, when big-dollar bikes were getting silly and before everything came crashing down in 2008. Now, with the economy crashing down around us again, it’s the perfect time to buy this no-reserve machine off Bring A Trailer. If nothing else, it can serve as a reminder of the heady days when people were throwing silly money at big, heavy, silly motorcycles.

What is this monstrosity anyway? The Rune was a semi-custom version of the Honda Valkyrie, which was itself a stripped-down version of the Gold Wing. The Gold Wing sold on its highway touring cred, and the Valkyrie sold to cruiserholics who wanted muscle. The Rune? It sold to people who wanted weird custom bikes but didn’t want a chopper.

Remember that in the early 2000s, expensive custom motorcycles were a Big Thing. Jesse James, the Teutuls, and Indian Larry were big-time TV stars at the time, and gaudy, nearly unrideable choppers were the name of the game. It didn’t matter how tasteless a customer was, somebody was willing to take their money and run. Even the OEMs realized there was a market here, which is how we got the Rune. It was a big change for Honda; instead of the “Nicest People” marketing, there were magazine ads with an axe-wielding barbarian, like something from John Buscema or even Frank Frazetta.

The Rune took the Valkyrie’s fairly straight-forward looks and added plenty of bizarro bodywork, a muffler that looked like a discarded sketch from a Buck Rogers comic book, and some extra chrome. Lots and lots of chrome! These bikes weren’t for riding cross-country to Americade in the rain, they were for posing.

Mind you, if you did want to ride the Rune long miles, it was perfectly capable. The engine was the Gold Wing’s liquid-cooled, 1832cc flat six, but with six throttle bodies, not two. Honda retuned the top end, with hotter cams and ignition, an upgrade good for around 90 horsepower at the rear wheel. This engine was much more enjoyable than a lumpy, air-cooled V-twin with a sketchy air filter assembled by some redneck in a garage. Throw in the long wheelbase and oddball leading-link front suspension (like something you’d see on a sidecar rig), and this machine would have been much more suitable for a trans-continental ride than the cobbled-together hardtail choppers it was competing with.

Still, it was an odd bike for a limited market. Honda never made more than a few hundred of these for each year of the production run. This 2004 model is from the first year of production, and it looks like it’s in gorgeous shape. If you don’t mind the funny looks, that is. These bikes were mechanically excellent, so if you want a machine that stands out for its looks and reliability, bid away! Better hurry, though—the price is rising fast.