Snag An Original Ducati Scrambler As Your Next Project Bike 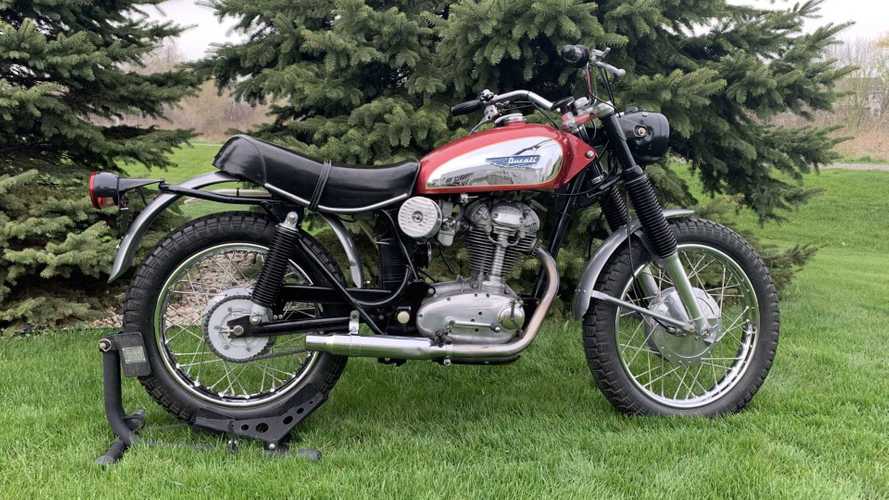 Rebirth of the cool.

The Ducati Scrambler is its own brand today. Whether you prefer café racers, enduros, or flat trackers, there's a Scrambler flavor to suit your taste. Ducati continues to diversify the current range and broaden the model's appeal, but the original Scrambler was a much simpler machine.

Designed primarily for the American market, the Scrambler was a very approachable package. The two-valve, single-cylinder engine produced enough power for experienced motorcyclists yet it was manageable for newer riders. Its graceful lines and neutral ergonomics also attracted many first-time buyers during its 1962-1974 production run. For those looking to recapture the essence of the first off-road motorcycles, Bring A Trailer has a 1969 Ducati Scrambler 350 on auction for the next week.

Don't Fall Far From The Tree:

Featuring a pristine red and chrome two-toned gas tank, this unit has been a display bike since 2005. It’s no wonder, as this Scrambler is practically all-original with the exception of a replacement tail light and exhaust. The seller also reported cosmetic damage to the seat and a missing center stand, but the silver fenders and black-painted frame are in impeccable condition for a 51-year-old motorcycle.

While the 340cc four-stroke single doesn’t currently run, the bike could be a good project for the moonlighting mechanic. Of course, without fluids running through it for the last 15 years, you’d want to replace those dried and cracked seals, but the engine’s stone-simplicity is great for garage tinkerers.

The new owner would also want to change the aging Pirellis and the fork oil before getting it on the road. Lastly, the front and rear drum brakes might need servicing, but the wheelset may be in good shape as the owner believes they were refinished in the past. Though the headlight-mounted speedometer/odometer lists 2,958 miles, there’s no confirming the actual mileage on the rig.

If you’re looking for a new addition to your collection or a new challenge on the workbench, a 1969 Ducati Scrambler would be a great fit. With a clean Wisconsin title up for grabs, the bid is currently at $2,600. Rush over to Bring A Trailer before it reaches today’s Ducati Scrambler prices.