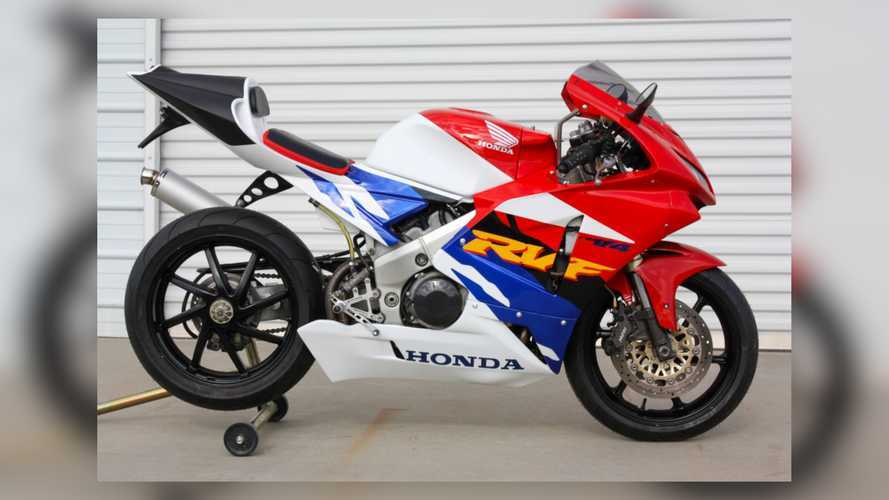 Full of Tyga Performance bits and ready to go!

Do you love Honda V4s? If so, you’re probably already acquainted with the RVF400, also known as the NC35. It’s yet another entry on the list of Amazing Bikes That Were Never Officially Released in the U.S. Still, since Honda introduced the NC35 in 1994, they’re now old enough to import legally without too much trouble.

This is the point where, if you know the NC35, you’re smiling. If you don’t, you’re probably wondering what’s so special about a 400cc sportbike. Modern 400s are good in a certain way, but they aren’t as special or powerful as this one. I mean, I mentioned that it’s a tiny, potent Honda V4 engine beating away in the heart of this tiny, precision track instrument, right?

It’s a liquid-cooled V4 with gear-driven cams, and it made a claimed 60 horsepower at 13,000 rpm when new. Add to that the single-sided swingarm, USD 41mm Showa forks (in 1994!), and a dual Nissin front disc brake setup. Altogether, it’s a pretty impressive package for its time. This particular one ups the ante even further, and features a Tyga RC211V body kit. Other Tyga bits everywhere include: full exhaust kit, rearsets, and carbon fiber heel and chain guards, rearsets, clutch, and instrument covers.

Recent service performed includes rebuilt front forks with new bushings and seals, rebuilt and jetted carbs with shiny new o-rings, full service with synthetic fluids, new battery and spark plugs, and brand new Michelin Pilot Power tires with zero miles on them. Speaking of miles, that’s one possible downside to this bike, as the actual mileage on the bike itself is unknown. It’s thought to be around 12,000 miles, for whatever that’s worth. The bike has a clean California title with non-op registration and no back fees owed at this time.

The only other issue the seller notes is that it currently has no blinkers. However, the factory wiring is still intact and in place, should you wish to hook some up and make it fully street-able again. If you’re interested, this Iconic Motorbikes auction ends on May 22, 2020 and bidding is up to US $9,500 at the time of writing. Reserve has been met already, so this bike should be going home with someone in the next week. Will it be you?