This Dragon Ball Motorcycle Model Takes Us Back To The Future 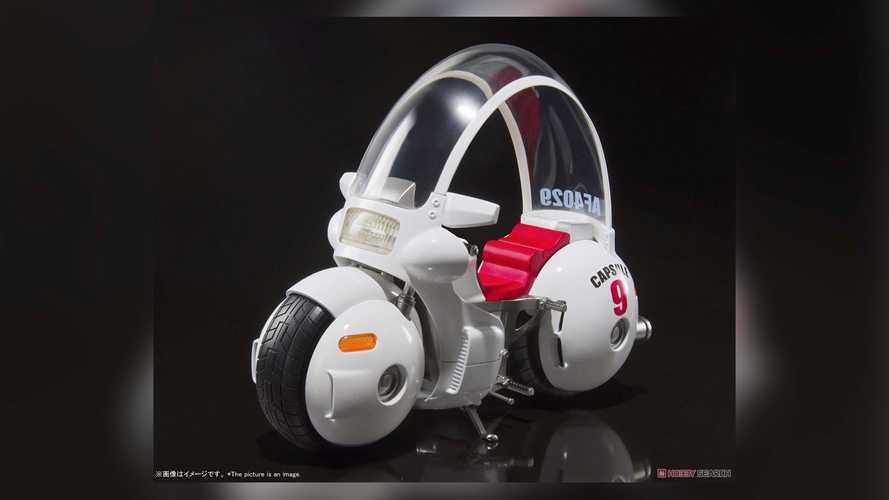 For those unfamiliar with the Dragon Ball universe, Bulma is one of us—a motorcycle enthusiast. As the second-longest-running character in the series, she’s ridden everything from a sleek red sportbike to a desert rat dual-sport to a transforming UJM. Though her tastes are varied, the Capsule No.9 motorcycle clearly points to her background as a brilliant scientist and the daughter to the founder of the Capsule Corporation.

Appearing in the first episode of the original Dragon Ball series, Bulma reveals her futuristic set of wheels by deploying a lipstick-sized pod. With a puff of smoke and a Bom! onamanapia, the sport-touring rig materializes out of thin air. If you’re a fan of the show or unique motorcycle design, Hobby Search Japan is offering a model recreation of Bulma’s Capsule No.9 motorcycle.

The first thing that commands attention on Bulma’s voluptuous ride is the extended glass windshield. Looping over the cockpit, the design redefines the term bubble fairing and pushes the motorcycle into tuk-tuk territory. While the head-on wind protection would be unmatched, I’d hate to see how the canopy fairs in crosswinds. Luckily, the No.9 doesn’t have to abide by physics in the cartoon.

Wheel covers at the front and rear make the design looks substantial and solid while the leg lowers and handguards keep any semblance of wind at bay. The king and queen seat pushes the motorcycle further into the touring category, but if you knew Bulma’s feisty personality, you’d probably refer to it as a queen and king seat. Inside the cockpit, a full control panel puts the TFT display on today’s Gold Wing and R 1250 GS to shame.

Despite the motorcycle’s girth, the sport tourer still has some giddy-up. Upon its first ride in the cartoon, Bulma rips a dank wheelie that sends our main hero, Goku, scrambling for a handhold. The Capsule No.9 bike not only accelerates with blinding speed and handles with ease, but it also jumps with the best dirt bikes on the market. If only animation were reality.

For the miniature of Bulma’s motorcycle, Bandai applied an alloy texture to the frame, exhaust cans, front fork. Both wheels rotate and the 6.8-inch model sits atop a specially-branded Capsule Corp. pedestal. Collectors can also pair the No.9 motorcycle with a Bulma figurine sold separately and a Goku figure comes with the set to help with faithfully recreating scenes from the series.

Whether you’re a Dragon Ball fanatic or motorcycle design geek—or both—it’s easy to appreciate the level of detail in the Capsule No.9 motorcycle model.