This Pristine 1974 Honda CB750 Four Could Be Yours 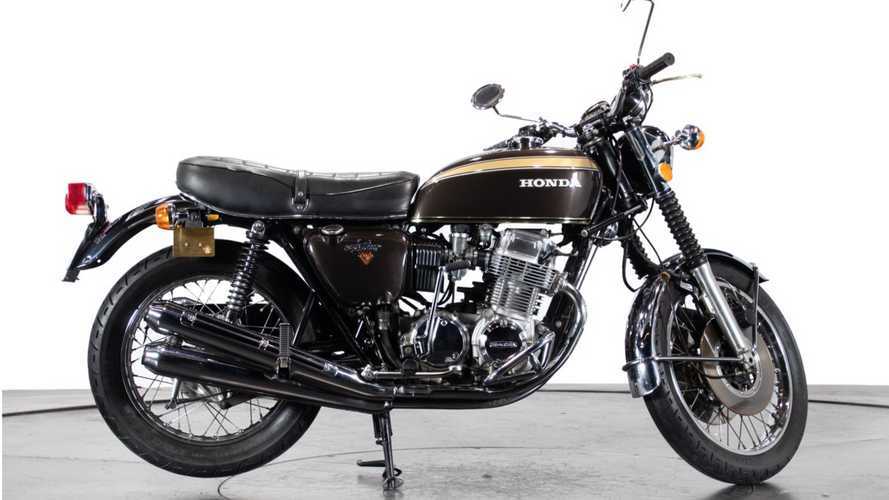 You can own an immaculate example of the bike that shaped the future of sportbikes.

In 1968, Honda shook the world when it introduced a revolutionary motorcycle in the Tokyo Motor Show.  An inline-four engined motorcycle named the CB750 Four, this bike was responsible for coining the term ‘superbike’. Before the Honda CB750 Four, the thought of an inline-four engined, high performance motorcycle rested solely with exotic bikes which were considered far beyond the reach of the average two-wheeled enthusiast. On top of that, the neophyte Honda CB750 defeated most multi-cylinder motorcycles in terms of performance-to-cost ratio.

The CB750 came with a 736cc in-line four engine producing a more-than-adequate 67 horsepower, something that even today, is quite a lot for first time motorcyclists. As such, the CB750 Four was no beginner’s bike. As mentioned, it was the bike that coined the term ‘superbike’ and went on to revolutionize the future of motorcycle performance, and sportbikes in general.

Classics For Your Collection:

The Honda CB750 Four eventually became known simply as the Four, because of how iconic it was. In an era dominated by twin cylinder engines and lackluster running gear, Honda presented a true machine which was undoubtedly a turning point in the performance motorcycle industry. Equipped with twin front disc brakes and a 5-speed gearbox, it could safely reach and sustain 125 miles per hour, and confidently come to a stop. On top of its sporty and performance oriented nature, the CB750 Four sported very smooth riding dynamics—even smoother than most of the cruisers available at the time—thanks to its inline-four engine.

As time went by, the CB750 Four proved to be a huge commercial success. So much so, that demand was well surpassing the capabilities of Honda to produce the bike. As such, Honda even had to go to the extent of redesigning its industrial plan so as to meet customer demand. These days, the CB750 Four is undoubtedly a collectors item. Having been inducted into the Japanese Automotive Hall Of Fame, the bike is without a shadow of a doubt a legend.

Gallery: This Pristine 1974 Honda CB750 Four Could Be Yours

This particular Honda CB750 Four is a 1974 model, and is on display in Reggio Emilia, Italy. The photos clearly show how immaculate the bike is. Finished in a striking black color with contrasting gold accents, the bike is completely original and has been well looked after. On sale for a rather upmarket $12,094, the price seems reasonable enough, given how pristine the bike is. For more information on the bike, view the original listing here.