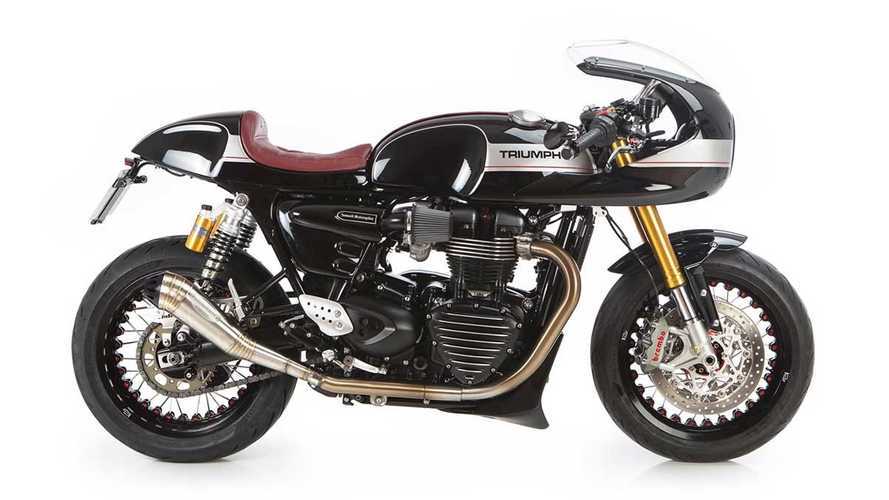 The Thruxton R is one of the closest things you’ll find to a custom roadster on a showroom floor. Refined styling and a premium fit and finish set the model at the top of Triumph’s modern-classic totem pole, but it’s more than just a pretty face. The Thruxton oozes personality in the form of 97 horsepower and 82 lb-ft of torque. That balance of beauty and brawn is hard to match, but for some, it just isn’t enough. Spanish custom shop Tamarit falls in this category, and their interpretation of Triumph’s flagship modern-classic borders on decadence.

When a customer approached the Tamarit team with a 2017 Thruxton R, a set budget, and the willingness to relinquish the creative reins, the Alicante-based builders knew they could assemble something special. After agreeing to a dark aesthetic and retaining the bike’s café racer elements, Tamarit went to work on making over the model.

This Triumph Thruxton Custom From Spain Is Stunning

To push the Thruxton’s classic design further into the ‘60s, the team fitted engine covers with highlighted fins and a fetching bubble fairing. Tamarit also drew the Monaco tail section and saddle combo from their own catalog to give the bike’s rear end a more flattering shape. A belly pan added some flair to the underside of the frame while a shortened front fender and tail tidy kit add by subtraction.

Though Tamarit used a fair amount of its own parts for the project, they went with MotoGadget’s m-Blaze series for the LED indicators and ribbed covers from French producer EDM. A Kineo tubeless spoked wheelset with red hubs and red spoke ends tied into the build’s paint scheme and modernized the Thruxton’s look.

On the performance front, the team custom-fitted dual FreeSpirits air filters on either side of the tank. The forward-facing 180-degree inlet tubes are designed to maximize airflow and reduce engine temperatures. Do they look cool? Yes. Will you bash them against your knees? Most definitely. To match the Thruxton R’s grace, Tamarit added some grun and pushed the horsepower into the triple digits with a custom 2-into-2 exhaust system.

Due to the black paint job and the Bordeaux leatherwork on the saddle and tank strap, the builders named the project Malasangre, which translates to bad blood in English. Luckily, the moniker isn’t a nod to the customer’s sentiment toward his newly transformed Thruxton. Honestly, if you weren’t certain that Triumph’s top modern-classic was a custom before, there’s no mistaking it now.