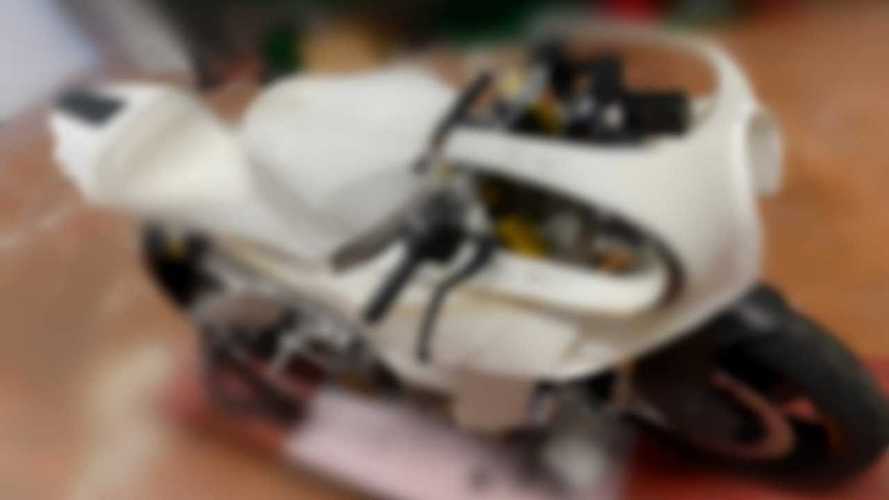 It’s all just a blur.

It looks like Bimota was ready to return to the motorcycle scene. It hit the ground running shortly after announcing its partnership with Kawasaki with the introduction of the co-designed Tesi H2. The Italian legacy brand then almost immediately followed up with a second bike concept—the KB4.

Instead of keeping some form of design consistency with the Tesi’s futuristic, Ninja-esque design, the designers were set loose and came up with what looks like an antithesis of the revived brand’s first (modern) bike. Renders of the KB4 concept showed a 60s-70s racer-inspired design with a bubble fairing and a big, round headlight. It looks like the KB4 is more than a render now, because Bimota recently shared two very blurry pictures of the KB4 on social media.

It’s actually a little cute and a little funny how Bimota did the pictures. It's like we’re looking at the bike through the eyes of an extremely shortsighted person who can’t find their glasses. That’s also an easy and inexpensive way of teasing a bike. We see just enough to entice us but enough to see the details.

This is the first peek at the KB4 Bimota has given us since it first announced the model was in the works. Interestingly, the bubble fairing’s curvy lines contrast the rest of the design’s sharp angles, as we can observe on the fuel tank, saddle, and tail.

It’s hard to make out what the front suspension set up is like (duh!) and to see whether the bike will, in fact, use a classic fork like in the renders or a swingarm like the Tesi H2. The golden accents inside the head cluster suggest this could be a fork. We can also spot a set a clip-ons and a floating tail that looks supported by a single, central shock.

The bike is expected to use the Kawasaki Ninja 1000’s inline-four engine and produce similar power figures (138 horsepower and 82 lb-ft of torque).

We could suppose that the Bimota KB4 will be unveiled at EICMA like the Tesi before it. Considering the current climate of uncertainty, however, it wouldn’t be surprising for the manufacturer to change its approach. We see you, Bimota, and we’ll be watching closely.