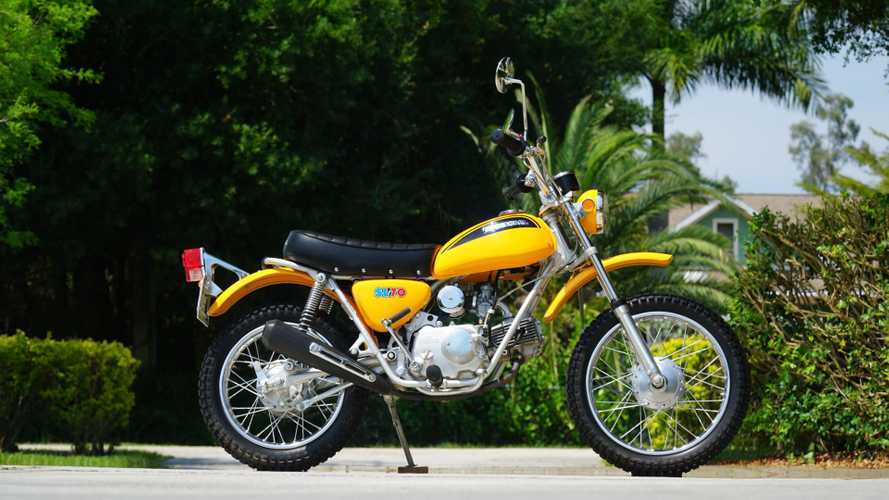 Miracles do happen, and here’s proof: a dualie that’s almost 50 years old, in as-new condition. It gets better: this 1971 Honda SL70 might be auctioned off on Bring A Trailer, but you shouldn’t actually need to bring a trailer. For a machine this size, a station wagon or minivan should be all you need.

The SL70 debuted in 1970 as a new dual-sport model, but most of them probably saw minimal time on the street. Even in the ‘70s, the 72cc air-cooled single-cylinder horizontal engine would have been pretty wimpy, with output at roughly six horsepower. With a four-speed gearbox, drum brakes front and rear, and easy-to-reach dual-shock setup, this machine was rugged and simple. A low-powered, robust off-road motorcycle? Sounds like the perfect dirt bike for teens to learn on!

Do You Need A Vintage Enduro?

That’s where many of these ended up. Sized between tiny monkey bikes and full-sized enduros like the SL125—they were essentially a minibike with knobbies on—the SL70 was a great little training bike. Honda’s American subsidiary designed this bike, and it was the perfect machine for the U.S. market at that time, with the booming off-road craze in mind. Kids raced this bike, toured the fields behind their farms, ripped wheelies through their neighborhoods en route to the trails on a Saturday morning—it was The Right Bike At The Right Time. Well, sort of. It was replaced by the XR75 after 1973, so the SL70 didn’t really last that long in the lineup.

However, it was tough bikes like this that laid the groundwork for the XRs, the CRs, the XLs, and all the other off-road machines that Honda has sold by the millions. The aftermarket industry benefited, too; the SL70’s durability meant you could bore it out and install various add-ons to gain a surprising amount of performance before you blew it up. Bikes like this created a whole new market for parts.

The off-road life is a tough gig in the long run, though, and most of these bikes were flogged hard and put away wet. Most SL70s have disappeared, and the remainders are in rough shape. The bike that’s being auctioned off is in immaculate shape—rare for anything from the ‘70s, even more rare for something that was intended to be run wide open across a corn field There are less than 150 miles on the odometer, and the ad indicates the bike spent its life gathering cobwebs at a vacation home in Virginia. If you’ve got the cash to buy it, this is probably the nicest example of an SL70 you’ll find outside a museum.