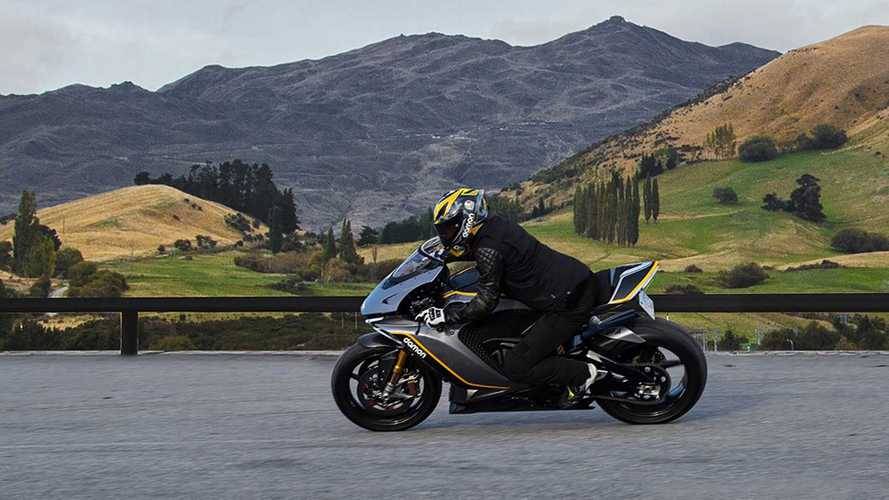 Canadian startup Damon Motorcycles made a lot of waves when it debuted its first electric motorcycle: the Hypersport. The striking electric sportbike launched at CES in January 2020 armed with the innovative CoPilot and Shift systems. In the weeks following the event, Damon opened its reservation books and invited potential customers to personalize and reserve their Hypersport online for only $100. The Founder's Edition sold out within four days, an unexpected success for the company.

Fast-forward four months and, amid a pandemic, the company is quietly pushing forward with its projects. So, how are things going for Damon, and what’s in store for the company? I got to catch up with CEO Jay Giraud and discuss what the team has been up to.

The Damon Motorcycles Hypersport Premier Sold Out In Four Days

I initially chatted with Giraud back in January, a few days only after Damon dropped the Hypersport. At the time, we did a deep dive into what the company stands for and what inspired the Hypersport innovation.

This time, we discussed challenges, development, and future models. Kind of.

Four Months After The Hypersport Debut, How Are Things Going For Damon?

Of course, we can’t turn to the future before first assessing how far the company has come since its CES debut. Though we haven’t heard much of Damon since the event, the Vancouver hive has been abuzz with activity.

Giraud said that the public’s response to the Hypersport has been extremely positive. People are curious about the CoPilot 360-degree safety system, and even more so about the bike’s Shift system that modifies the riding ergonomics.

Despite the pandemic, the company still receives an average of two to three new orders a day. The number of bookings has more than doubled and continues to grow daily. Giraud expects the order book to exceed 1,000 bookings before the end of the year.

He admitted that he thought the company would have to break a few walls and to work a lot harder for exposure but the response has been overwhelmingly positive. That leads him to believe that people are optimistic about the future and that they are willing to trust Damon.

To help further its development, Damon recently added Mission Motors’ intellectual property to its portfolio. Mission was a California-based company first founded as an electric motorcycle manufacturer that eventually turned into an electronic component supplier.

The company itself is also reaping the benefits of this newfound popularity and Giraud proudly reported that the team is expanding, notably the engineering department that has grown from 13 to 28 people, located all over the world.

Update On The Hypersport

The hype surrounding Damon is mainly caused by the Hypersport. The ingredients for success are all there: the bike looks really good, it’s packed with a bunch of cool tech features, at 200 horsepower and a top speed of 200 mph, the power figures are compelling, and the bike is expected to be good for 200 miles (city and highway combined). That almost sounds too good to be true and, to a certain extent, it kind of is.

By that, I mean that the bike has yet to enter production. The team is running a small fleet of prototypes and putting the Hypersport through its paces but there is still work to be done for the model to hit the production line and land in the customers’ hands.

When I asked him about the bike’s developmental stage, Giraud said that they’re pretty much at the mid-point now. What’s taking the most time? The battery, he answered.

“An electric motorcycle company is a battery company,” Giraud stated when we touched on the subject. He explained that designing a battery that not only meets their extremely high (ambitious?) expectation but that’s also safe is their biggest challenge—one they are still working through.

Talking about the competitors, he said that the models currently on the market are good bikes, but they are not great bikes. "They aren't better than gas bikes,” referring to the technology's range and limitations. Simply put, most people are still turning to gas motorcycles because the electric offering hasn't quite reached the same level yet. To get people off oil, electric bikes need to be better than gas ones.

With the Hypersport, he hopes that Damon will create an electric revolution and set a new standard for the industry. He wants the introduction of their proprietary electric powertrain, dubbed Hyperdrive, to signal the beginning of the end for internal combustion engines.

Cocky? Visionary? A little bit of both? Maybe, but hearing Giraud talk about the project, it doesn’t sound like a case of inflated ego—he actually believes in making the world a little better and a little safer. It’s hard not to root for the team at this point.

Will this bike be the end of gas bikes?

To achieve that optimistic mission, Damon is developing a battery pack that not only acts as an energy storage device (obviously) but also as a structural component—think of an engine used as a stressed member. All the bike’s components are attached to the battery which means that the structure must be flexible and able to withstand a certain degree of torsion and strain.

The battery must be unconditionally safe—if the vehicle is in a crash, it cannot catch fire. It must also be able to sustainably discharge high levels of energy without heating up or losing firepower as the charge decreases.

That’s why purchasing a battery pack from a third-party supplier doesn’t cut it for Damon. The bar is set high and there’s no compromise possible which is why Giraud feels they must develop a product that will meet and hopefully surpass the expectations. Aware of the challenge this poses, the startup brought people from Alta, Tesla, Intel, and other tech-oriented companies onboard, people who have an understanding of what Damon is trying to achieve and have an expertise that can help propel development forward.

I asked Giraud how the bikes will be produced once they hit production and he said that most of the process will be automated and completed in-house, with certain components assembled by hand. Some of the bigger parts, like the electric motor, are outsourced. The battery definitely won't be.

In March 2020, Damon released a duo of special-edition Hypersports dubbed Arctic Sun and Midnight Sun available for pre-orders. Along with the announcement, the company was proud to confirm that half of its pool of potential buyers are Millenials—the elusive age group all manufacturers are attempting to seduce with varying degrees of success.

Of course, I was curious to know what makes the Hypersport so appealing to the Snowflake generation with a bad rep according to Giraud. He didn't mince his words: “Nobody understands the Millennials because the people making decisions are Boomers.” Ouch. He added: “Millennials don’t go to work for Harley-Davidson or Honda to help change that perception; they choose to work for companies like Google and Facebook.”

He said that he personally never bought into that preconceived idea that Millennials don't buy cars and bikes and live in overpriced condos, above their means. On the contrary, he knows a lot of successful Millennials. Not only that, but while Millennials represent the present, Generation Z is the future, and that also needs to be taken into consideration.

He believes Damon is popular with that age group because of its high-end safety technologies. He explained that the notion of safety has evolved and that the current and future generations are used to safer vehicles equipped with more high-tech features. They don’t care so much about owning a motorcycle that's mean-looking and sounding—they want a motorcycle that makes them feel safe.With CoPilot, Damon checks these boxes.

We also talked about brand image, another contributing factor of the company's popularity with Gen Y. Damon is brand new to the motorcycle landscape and has yet to find its groove—that also leaves its brand image canvas blank, an opportunity for Giraud and his team to paint what he hopes will be a friendly picture. He wants Damon to be perceived as an approachable brand, one that's inclusive and makes everyone feel welcome. Beyond the products, he sees Damon as a movement people will hopefully be able relate to.

He used Harley as an example, explaining how the brand has that badass image, almost a little scary, which has been its biggest selling point for decades. However, it’s not perceived as a friendly brand. If you’re not part of the H-D crew, you’re an outsider. He said there's a similar situation with Ducatisti who aren’t always inclusive and tend to be very protective of the brand.

Now, What’s Next For The Company?

After discussing what wascurrently in the works, I was curious to find out where Giraud and Damon wanted to go next. They have a solid concept, righteous ambitions, and a fresh outlook on the future. What does this "battery company" want to achieve next? Does it want to develop its portfolio of models, or maybe develop new technologies?

Giraud answered that within the next decade, motorcycles will become increasingly autonomous and that he could see Damon boarding that train. He added that current models already are autonomous to a certain extent, using the BMW S1000RR’s traction control as an example of how a system works—on its own—to keep the wheels grounded.

In his opinion, the trend is inevitable and is part of the technology's evolution. The only thing his team can do is make sure it's ready for it. If future motorcycles can avoid crashes on their own, they eventually will. However, he added that riders will be able to turn off any eventual autonomous or semi-autonomous systems (including CoPilot) should they want a more minimalist experience. The technology won't be imposed on buyers.

As for the topic of new models, Giraud didn’t elaborate. All he had to say on the matter was that the Hyperdrive powertrain that underlines the Hypersport is modular and can be tuned differently by tweaking the software.

I could hear the subtle note of excitement in his tone when he said it. I suppose we can say he answered the question without answering. Considering the sheer amount of time and funds invested in developing Damon's powertrain and technology, it would be a shame if Hyperdrive didn’t find other applications further down the road...

I could see Damon introduce a stripped-down Hypersport à la streetfighter. Or why not an adventure or enduro model? After all, the market is bananas for dual-sports and other electric companies such as Zero and Alta Motors got their start with off-road models. Add to that the fact that Alta co-founder Derek Dorresteyn is part of the Damon crew and I think we're onto something. Let’s just say that I wouldn’t be surprised if we saw a Hypersport spin-off unveiled sooner rather than later.