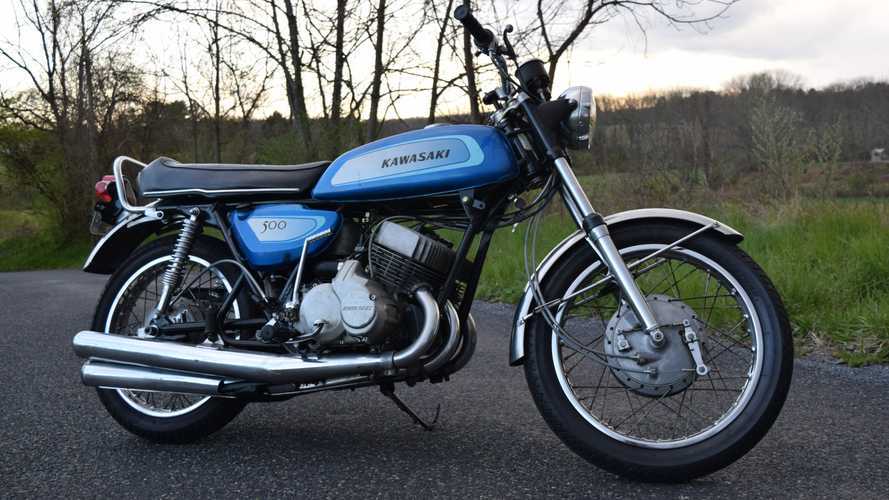 You can own "the triple with the ripple."

The horsepower wars were alive and well in the late 1960s, both on two and four wheels. For 1969, Kawasaki set out to do what others had said was impossible: build a 500cc motorcycle that would make 60 horsepower and run the quarter-mile in 13 seconds. The result was the H1 Mach III. It did exactly what it set out to do, but with drum brakes front and rear and a shall we say "flexible" frame, it was a bit scary to ride. It soon earned a nickname of "the triple with the ripple."

For sale on Bring a Trailer is this 1971, little changed from the original 1969 model except for a smooth gas tank, rather than the original with cutouts for the rider's knees. The bike was stored in a garage by a single owner from 1974 all the way until 2018. That was when Chris Nonack bought it, restored it, and put it back on the road.

By his own admission, this is not an all-original restoration. The frame and swingarm have been repainted, while the chrome and other paint remain original. The seat has small tears, as well as a little rust on the hardware and release lever. The wire wheels have some pitting but wear new Bridgestone Battleax tires. Other replacement parts include the handlebar, grips, Pingel petcock, wiring harness, ignition components, rear shocks, fork tubes and seals, brake shoes, bearings, and bushings. All original parts plus a factory service manual and clean Pennsylvania title are included in the sale.

Nonack rebuilt the engine in 2019. It uses three Mikuni VM28 carburetors, oil injection, a three-into-three exhaust system, and an updated Lakeserv CDI ignition module. The H1 was notably the first production motorcycle to use electronic ignition. The bike itself is a rolling time capsule, with just over 5,000 original miles. Nonack put about 400 of them on himself.

"I wanted it to scare me the way it scared all those other people back in the day," Nonack told me. "It delivered, and that's all I ever wanted out of it." His reason for selling the bike is to raise money for his latest project, a Subaru BRZ rally car. As a rally fan and former BRZ owner myself, I wholeheartedly approve.