This Life-Size Honda Super Cub Is A 3D Cardboard Sculpture 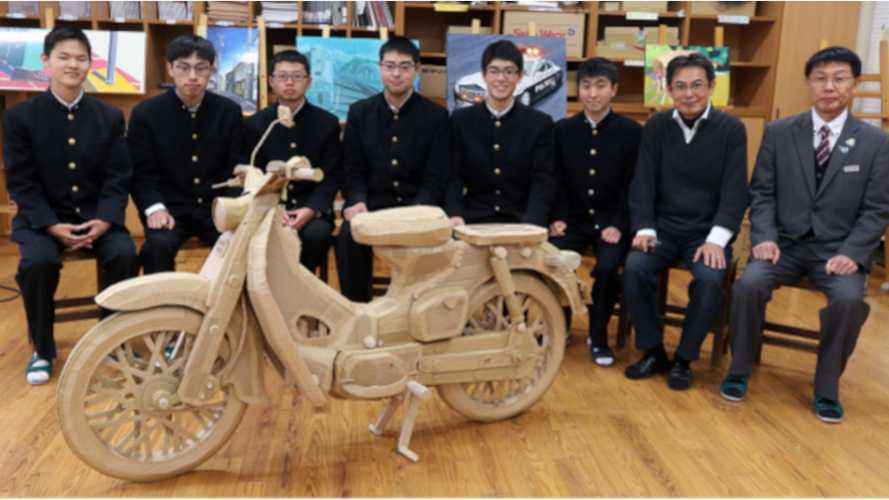 These art students are clearly ready to take over the world.

Folks, I’m afraid I’m here to talk to you about a Honda Super Cub again. This one’s a bit different than the others, though. This one is a papier-mâché (or paper mache, for those of you who hate diacritics) Super Cub. It’s also life-sized, and although it’s essentially an unbelievable cardboard sculpture of a Super Cub, it features some parts that actually work!

No, not the engine. Sadly, this is real life, not a fantastical Studio Ghibli setting where all manners of magic are possible. Combustion and a mountain of paper products are not two great tastes that taste great together. Still, what’s extra funny about this is that although it’s proudly displayed on the official Honda Super Cub fansite, the team of six art students from Hachimanyama Technical High School who built it repeatedly mentioned that they weren’t even that interested in Super Cubs when they started. By the end of the project, though, you’d better believe they knew the C100 they built inside and out, in intricate detail.

This Is The Cutest, Most Awesome Honda Cub LEGO Sculpture Ever

All told, the project took three months over a summer break to complete for the six-student team. Their school is mainly known in local circles for its football club—soccer for us poor benighted Americans who are too busy with our own sort of football—as well as having won two separate World Robot Olympiad competitions. This Super Cub sculpture was built for an upcoming local prefectural festival in Ehime, where the school is based, but has since received international attention. I mean, how could you see something like this and not be intrigued, even if you don’t care at all about Super Cubs or even bikes in general?

Group projects depend entirely on the team you assemble. While it’s true that super type-A personalities often like to take on more work than they can realistically accomplish by themselves, if you look in the background of any person you know who is like this, chances are excellent that they had at least one bad group experience somewhere along the way. That happens a lot in school, because you get those one or two people that do all the work, and then you have the others who just kind of drift along with the current, happy to share your good (or at least passing) grade while not actually lifting a finger.

Not all groups have to be like this, though! In this group, different members had different expertise that contributed to the end product. In the end, the students compared themselves favorably to a team of horses, working seamlessly together to accomplish their one goal. Group leader Kuon Ogami loves making cardboard cars, and coordinated the whole thing. Meanwhile, Yoshiyuki Ono had woodworking experience, so he worked on some of the wooden structural elements.

To be a successful life-size cardboard sculpture, the Super Cub had to be able to support its own weight. That wasn’t too difficult to accomplish, after judicious moistening and re-forming of cardboard and wood bonding glue to create the rigid, immobile structures. Where the wood came into play was for the moving parts, like the wheels and handlebars. You can actually squeeze the levers on the handlebars and feel them actuate thanks to clever construction involving wood, piano wire, string, and springs.

The attention to detail is simply stunning. Guys, if you lift the saddle, there’s a fuel tank and fuel filler cap underneath, as well as a hinge that looks like you’d expect if you were lifting a real saddle on a real Super Cub. The Honda logo, headlight, and little decorative grille up front are more beautiful design touches that only serve to bring this amazing work of art to life.

Papier-mâché involves taking existing paper (or, in this case, recycled cardboard), getting it wet, and then reshaping it until it fits the image you want. You carefully glue it into place, and then you let the whole thing dry. It has to be done in multiple steps, because you’re constantly having to let time and air do their thing. Like applying multiple layers of paint, you can’t rush the process, or it won’t turn out the way you want. In this case, a finishing layer of kraft paper smoothed the Super Cub project out and gave it the finished look we’ll be admiring for years to come.

What will these students go on to create in the future? Neither we nor they probably know, but it’ll obviously be amazing to see.