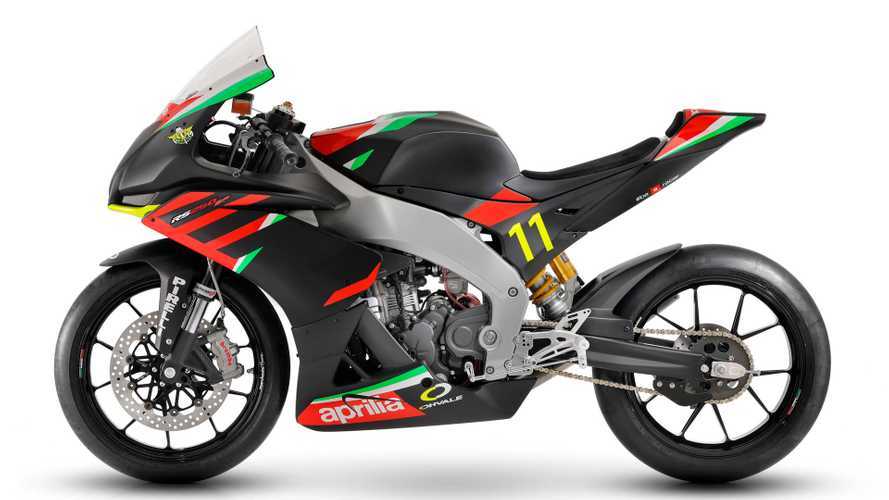 It's not cheap, but it comes ready to race.

The Aprilia RS250 SP sportbike is about to make two-fiddys great again. Great fun comes with great responsibility, however. Great financial responsibility, that is, because the new Aprilia will cost 9,700 Euros in its Italian home market.

Aprilia announced the RS250 SP at EICMA in November, 2019, as almost an afterthought. Most of the bike is actually built by Ohvale, but the engine is Aprilia-built, and the bike carries the Aprilia badge.

The RS250 name carries a lot of street cred in Europe thanks to the older two-stroke RS250. That street-legal machine was sold from 1995 through 2002, and was powered by a re-tuned Suzuki RG250 engine. The new RS250 SP has morphed into a four-stroke, but otherwise, it seems to be built along the same lines as the original. The emphasis is on light weight, and handling.

Wait—isn't the entry-level sportbike market already crowded? Yeah, it is, but the SP is not a porky bargain-basement machine. It won’t even be street-legal. It’s sold as a track-only machine, for the new FMI Aprilia Sport Championship spec series. This is a feeder series, intended to train riders as young as 11.

Because it’s intended for track use, the RS250 SP comes without street-legal equipment (no blinkers, headlight, etc.), which keeps things simple and reduces weight. Other high-spec components drive the price up, though. It comes with Brembo brakes, Marchesini wheels, Pirelli tires, SC-Project exhaust and Ohlins suspension. The single-cylinder engine is only rated for 28 horsepower, but with a claimed weight of 105 kg, this machine should still be wicked in the corners. For 250-class spec racing, the organizers (and the parents of the racers) aren’t so concerned about high speeds in the straights.

It’s doubtful we’ll see any of the Aprilia Sport Championship races this year, and certainly not the six-race series. There’s been considerable interest in this machine since it was announced, though, and it may accomplish two goals for Aprilia: help train Italian racers for MotoGP, and help train Aprilia in the art of building small-cc race bikes that could be used for Moto3.