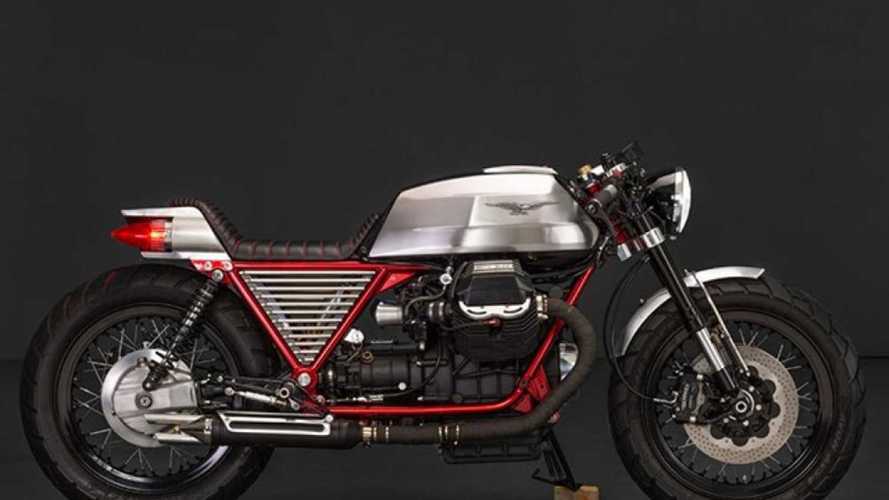 This bike was inspired by the design of 1950s classic cars.

At first glance, you’d be remiss to think that the custom bike employed a modern, or even futuristic design. Yes, the angular lines and pointy fins, as well as the paint job give off a steampunk aura. However, a quick glimpse into the past of automotive history would reveal an era that employed such design—save for the all gray colorways. Yes, La Monica’s design was influenced by 1950s American automotive design, particularly those of Cadillac. Some of the most iconic Cadillacs of that era, the DeVille and El Dorado, had design features such as elongated fins, pointed tail lights and curved windows. Something the folks at Dirty Seven Garage adopted and interpreted into their custom Moto Guzzi.

For starters, the bodywork was completely revamped. A custom tank and tail section were crafted and topped off with a brushed metal finish. The tail section was crafted out of steel, and holds a pair of 1959 Cadillac tail lights—further accentuating the bike’s design influence. The engine, carburetors, and all mechanical components received a subtle, yet complimenting black finish which made the custom painted caramel red chassis stand out even more. The bikini fairing was ditched in favor of a naked look, and lots of the running gear including the wheels, tires, and a front end from a Kawasaki Z1000 were retrofitted into the old Guzzi.

Another thing to note, apart from aesthetics, is the fact that the 844cc twin was bumped up in displacement to 1000cc, proving the bike is equal parts show and go. A bunch of retro-modern accessories such as Rizoma knobs and bar-end mirrors, and Kellerman indicators adorn the bike as well. Overall, La Monica is a testament of the creativity and boundless design inspiration that Dirty Seven Garage was able to forge into existence in a thoroughly seamless fashion. For more amazing works of art, check out more of their creations, as well as other services here.