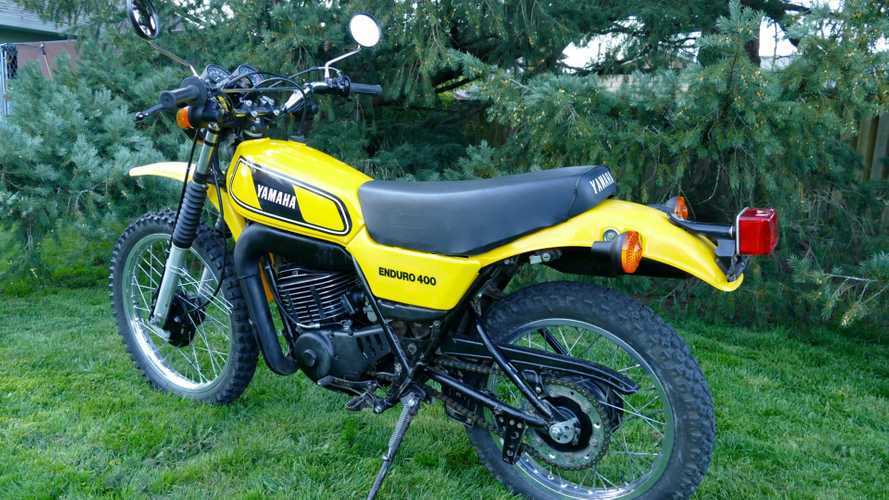 This vintage dualie is ready to ride on street or trail.

If you want to own one of the baddest dual sport motorcycles of the late 1970s, now’s your chance. BringATrailer has an absolutely gorgeous 1978 Yamaha DT400 for sale, and there’s no reserve price.

The DT400 was Yamaha’s big-bore two-stroke dualie in its day. It shared showroom floors with the XT500 four-stroke thumper, but the four-stroke street-and-trail machines were the future, and the DT400 was sort of the last of its breed. Smaller two-smokers lasted a lot longer (the Yamaha DT125 is still available in some countries!), but the DT400 was canceled in 1979.

The DT line didn’t have the screaming high-end delivery of competition-oriented two-strokes. The bikes tended to be sensible, as they were aimed for street use. The 400’s air-cooled single-cylinder engine (with five-speed gearbox) put out roughly 22 hp, which could supposedly push the machine to just under 85 mph. With drum brakes front and rear and a squirrelly old-school chassis, this thing wouldn’t have been a treat to flog at high speed, though. The engines had a reputation for bad vibration, too. At least there’s a monoshock suspension setup, even though it certainly wouldn’t be up to modern standards.

Time To Get Dirty:

Most people wouldn’t be buying this vintage machine for fast-guy antics, though. It’s a fairly well-preserved specimen, and it’s in a sweet niche. It’s not so pretty that you’d be afraid to ride it, and it’s not so beat-up that it’s basically a beater. It might not be a daily rider, but it would definitely be a fun weekend cruiser. With under 8,000 miles on the odometer, there should be plenty of life left in this DT400, if it’s taken care of.

The ad says the bike’s seen a lot of basic maintenance. The carburetor’s been rebuilt, some dings and nicks have been fixed, and there’s a new air filter and battery. The transmission fluid was changed, and the wheels trued. The seller says new tires would be a good idea, and there will likely be other to-do items, but this does appear like a very rideable machine from a long-gone era.