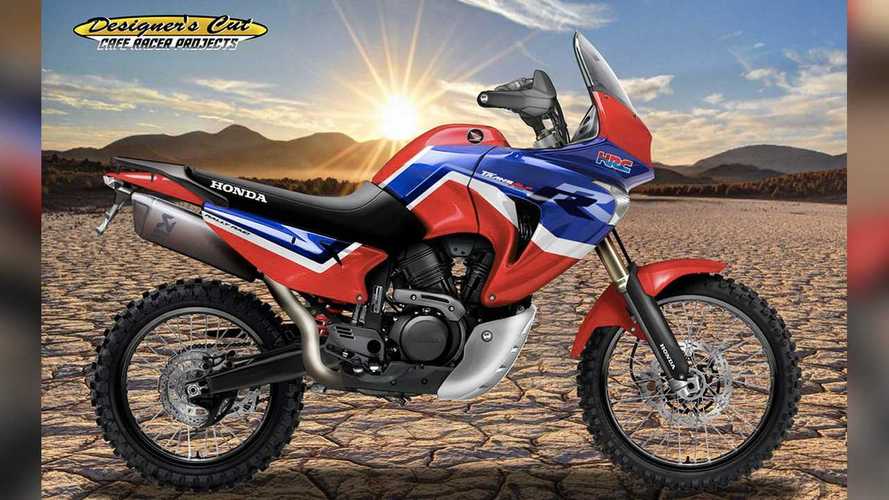 Please let this be real.

Rumors surrounding the Honda Africa Twin aren’t anything new. While the one about Honda upsizing its legendary ADV turned out to be true, those about a mid-size version have yet to be confirmed. While the rumor has been documented by some of the most important outlets, we have yet to hear anything from Honda who has managed to keep the project (if it even exists) under wraps.

That doesn’t mean we can’t fantasize about the possibilities and imagine what a downsized Africa Twin would look like. Designer Oberdan Bezzi put pen to paper (or to digital tablet) and came up with a render of what a mid-weight Honda ADV would look like and it makes us hopeful that there is such a thing as a baby Africa Twin.

One thing that’s becoming increasingly clearer with every new rumor is that, while “baby Africa Twin” is quite the evocative name, the bike itself likely wouldn’t exactly be a small CRF. Chances are, if there is such a model on Honda’s to-do list, that the bike will be an evolution of the existing NC750X or, why not, a revival of the XL series. After all, some sources have gone as far as to suggest that the “baby Africa” could adopt the Transalp moniker, a name used in Europe to identify the XL400 to 700 dual-sport bikes produced from 1987 to 2012.

Bezzi seems to agree with that theory since, while his design adopts a silhouette clearly inspired by the CRF, the engine is in a league of its own. Interestingly, he gave his version of the revived Transalp a 650cc v-twin engine instead of a parallel-twin. The original Transalp used a 583cc, 52-degree v-twin so we know where he got the idea from.

The minimalistic fairing, flat nose, tall windshield, sump plate, and upswept tail give the design a look that’s similar to the Africa Twin but also different. With this render, Bezzi clearly says that his vision for a Honda mid-weight ADV shares DNA with the flagship but that it’s more than just a downsized spinoff. The "baby Africa" gets to be a standalone model.

With a look like that, Honda would have no problem going after the increasingly aggressive competition in the segment. Now, if only the rumors could turn out to be true.