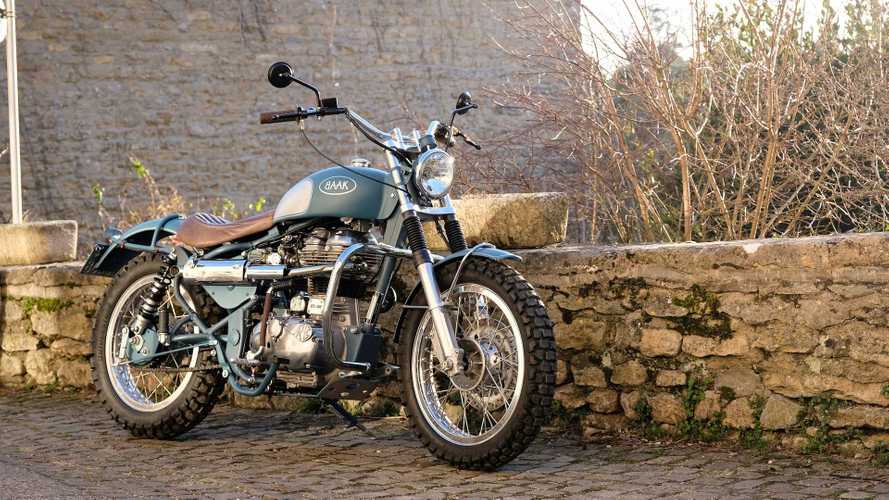 Stylish and functional, on and off road.

Imagine waking up in the French country side on a sunny Sunday morning. You head over to the kitchen to find out that you've run out of baguettes. So you head over to the marketplace to buy some. Now, the marketplace is about 10 miles away and entails passing through some cobble stone roads and light trails in order to get there. What better machine to make that leisurely trip to admire all the sights and sounds the French countryside has to offer, than this custom Royal Enfield Classic 500?

Royal Enfields have been around for a very long time. I mean pre-World War I old. Established in 1893, in Redditch, United Kingdom, Royal Enfield is one of the oldest motorcycle manufacturers to still be in production to this day. Mind you, they've made quite a name for themselves, and continue to be a strong player in the mainstream motorcycle scene.

One of their most popular bikes, and probably a huge contributor to their global success, is the Royal Enfield Classic 500. Based on its predecessor, the Royal Enfield Bullet which was introduced in 1932, the Classic 500, and its smaller sibling, the Classic 350, share the same iconic rugged styling of the Bullet. The bike gives off a very early twentieth century military aesthetic with its low stance, long wheelbase, and sweeping fenders. The Classic 500 is also extremely popular among custom builders, since it's pretty much a blank canvas for a classic build. What you could make out of a Classic 500 is basically limitless, with anything ranging from scramblers, cafe racers, and everything in between.

This particular Royal Enfield Classic 500 was built by BAAK. Based out of France, BAAK has quite an extensive portfolio of creations ranging from custom motorcycles, to custom vintage and classic cars. This Royal Enfield Classic 500 was commissioned by Nathalie and Nelson, a mother and son duo, who wanted to get a new bike for riding around town, as well as light trails and off-road use. The intended user of the bike would be Nathalie (the mother), who has reasonable experience with classic trials machines. As such, the mother and son duo crafted a list of modifications they wanted for the Classic 500, and commissioned BAAK to turn their vision into a reality.

Because of how simple the Royal Enfield Classic 500 is, the team at BAAK went straight into shedding weight. A whole 55 pounds of it. They then increased suspension performance by replacing the rear shock absorbers with higher-end, adjustable units. The fenders were also replaced with lightweight aluminum ones. A new set of aluminum spoked wheels wrapped in knobby scrambler tires were also fitted. As far as engine performance is concerned, they swapped in a high compression piston kit, as well as a free flowing intake and exhaust system.

To top it all off, the bike was painted in a gorgeous matte grey with a tinge of green, further accentuating its classic roots, as well as its intended purpose as a classic-styled dual sport. The bike definitely looks as good as it performs given the extensive aesthetic and performance mods the team at BAAK have done to it. This masterpiece showcases both the versatility of the Royal Enfield Classic 500, as well as the skilled craftsmanship of BAAK.