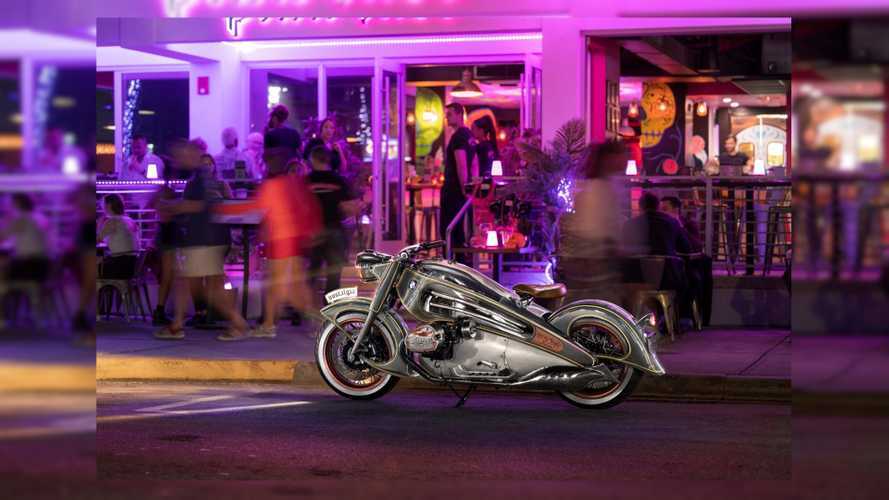 With celebrities and collectors lined up to get their hands on one, NMOTO Nostalgia owners are already a pretty exclusive club. That wasn’t good enough for one un-named owner, however. He wanted something truly special.

A Harley Forty-Eight Lurks Inside This Retro Road Racer
⠀

When the owner approached NMOTO’s founder and CEO Alan Niznik wanting his bike customized, he first asked for titanium panels. When Niznik explained how difficult titanium was to work with, the client then suggested platinum with rose gold trim.

Fortunately, Niznik had just added Christian Travert, designer of the Y2K MTT powered by a Bell helicopter turbine, to his team. If there was anyone who could do it, it was Travert.

After Travert explained the challenges of platinum plating, a process which takes nearly five times as long as chrome and requires extensive mirror-polishing between each step, Niznik asked the client if he could do a limited run of ten bikes, with the client receiving number one. When the client agreed, Niznik and Travert got to work, and the Nostalgia 85th anniversary edition was born.

The base Nostalgia is already an artistic masterpiece designed as a tribute to the 1934 BMW R7 prototype and is based on a BMW R nineT. The anniversary edition takes the Nostalgia from a work of art to a piece of fine jewelry. In addition to the platinum plated panels and pink gold trim, it also comes with a Cartier timepiece, Louis Vuitton leather seat, and engraved cylinder heads. Number one has a depiction of Mount Rushmore, but the lucky nine who get to claim the others can choose anything they want as long as it will fit.

For a bit of extra nostalgia, the anniversary comes with a “suicide” hand shifter as seen on the original R7 which the rider can choose to use instead of the standard foot shifter. The rider can also choose between using the added kick starter or a push-button electric starter.

Most of these bikes will probably end up as the jewel of someone’s collection and will likely remain a showpiece, but that’s okay. The NMOTO 85th Anniversary Edition should be in a museum.