This Magni Sport 1200S Is The Coolest Suzuki Bandit Ever 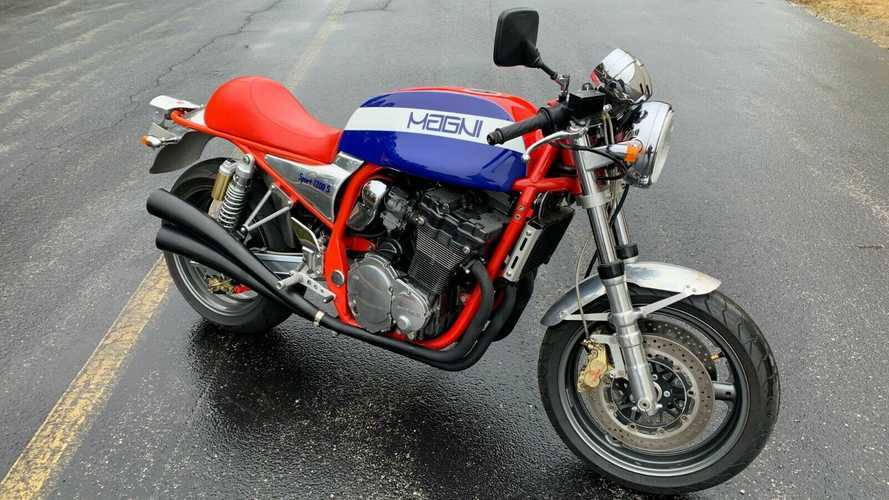 A thing of beauty really is a joy forever.

Italy is a magical land close to the hearts of many motorcyclists, and for good reason. It’s probably a toss-up between Italy and the UK for the sheer number of mad genius boutique bike engineers per capita. Still, there’s probably nothing else in the world like the work of Arturo Magni, who was a bit like the Gigi Dall’Igna of his day. Friends, the Magni Sport 1200S you see here is the very last model that Magni ever produced.

Like many amazing motorcycles, it was never officially sold in the U.S. Fans of vintage racing may recall that MV Agusta used to be an incredibly dominant force in motorcycle grand prix racing. Arturo Magni was a driving force behind MV winning over 200 grands prix. Before that, he worked as the chief mechanic for Gilera’s racing effort, and he did well there. However, the MV Reparto Corsa racing team won every single 500 World Championship between 1958 and 1974, and Magni headed up that race department the entire time.

It took former legendary MV racer Giacomo Agostini to finally break MV’s winning streak, with Ago racing a two-stroke Yamaha to victory in 1975. The writing was on the wall as the era of Japanese two-strokes quickly took over, and by 1977, the race team was kaput. Magni took his skills elsewhere to start his own MV-specialist shop to do performance mods on MV’s road machines. That worked well until 1980, when MV stopped making road bikes.

The man was nothing if not adaptable and smart, so he simply started making chassis that fit Japanese engines, as one did during that time period. Japanese manufacturers were cranking out some excellent engines, but chassis-building was regrettably not up to the task of handling all that power—so plenty of enterprising engineers stepped up to fill that need.

As bespoke machines made in an uncompromising way, Magni bikes didn’t come cheap, and the Sport 1200S was no exception. It was a bargain if you were looking for the styling of an MV 750. However, it was also powered by an 1156cc engine from a Suzuki Bandit 1200 and featured several stock bits from the GSX 1200 Inazuma variant, including its swingarm.

This particular example has 17,000 kilometers (or 10,563 miles) on the odometer. It’s currently located in New York, New York, and is being offered on eBay with an as-yet unknown reserve price. The auction ends on Wednesday, March 25, 2020, and the current bid is up to $10,601 at the time of writing. Ceriani forks, Brembo brakes, and Showa rear shocks came standard on all Magni Sport 1200S bikes sold, including this one.

As for Magni, the tight-knit family company still makes plenty of parts, and Magni gatherings that feature some of the gorgeous, excellently built machines that came out of the Magni workshop happen every year. Arturo Magni himself died in 2015 at the age of 90, but left behind an untouchable legacy that includes this bike.