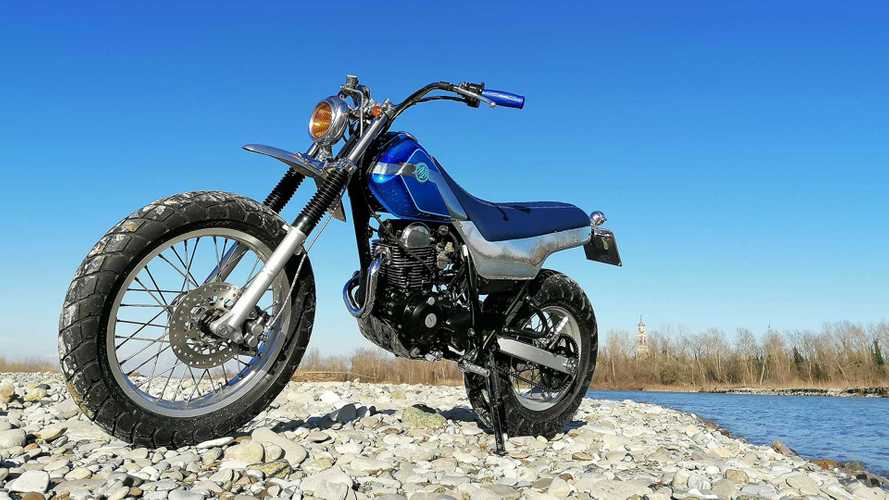 A quirky bike made even more quirky.

When the Yamaha TW125 was released in the late nineties, many didn't know what to make of it. Reviews on the bike were quite varied, with opinions ranging from how much the bike sucked for daily commuting (duh), to how capable the bike was off-road. Obviously, those who commented the former totally missed the point of this machine. At first glance, one thing that's certain to grab your attention is the morbidly oversized rear tire. Sporting a 180/80 tire on a 14 inch rim, it was obvious that this machine had a very specific niche. Paired with the engine's docile power output of merely 11 horsepower and 9.7 Nm of torque, it goes without saying that this bike is at home beyond the confines of paved roads.

Beyond The Road, In Style:

Does This Custom Speed Triple Flat Tracker Have Warp Drive?

With such a unique machine, it's undeniable that this bike is oozing with character. I'd even go as far as saying that if I had one in my garage, I'd treat like an eager puppy and take it places I wouldn't dare take my other bikes. Definitely worth a second glance in stock form, what more if customized to a degree that accentuates its versatility, whilst emphasizing its playful nature? That's precisely what the folks at ND Motociclette, a popular custom motorcycle shop in Italy, have done. The idea for this bayside blue beauty was born out of an evening's discussion over beer with Nico and Giada, the owners of ND Motociclette, and their client, the owner of the Yamaha TW125. Initially, the bike was meant to come in for regular service. Having been ridden and enjoyed by its owner for years on the beaches and trails round Italy, he wanted to give the bike a refreshing look.

Alas, that evening conversation which started out with playful banter, and tossing random ideas left and right yielded this beautiful creation. Inspired by the California custom bike scene, as well as bit of chopper culture, the Nico and Giada transformed the TW125 from a plastic-clad, clunky old trail bike into a seamless beauty sporting fine lines and sweeping curves. Having been stripped of nearly all plastic parts, the team at ND Motociclette handcrafted nearly all of the bike's bodywork out of aluminum and stainless steel.  The bike sports a radiant blue coat with matching chrome trim, giving the bike a truly Californian look and feel. The rest of the bike's componentry such as its riser handlebar, round headlight, and two-seater banana seat are common fare amongst classic-themed bikes like this, however the way they all fit seamlessly into the design of the bike truly makes the bike look all the more gorgeous.