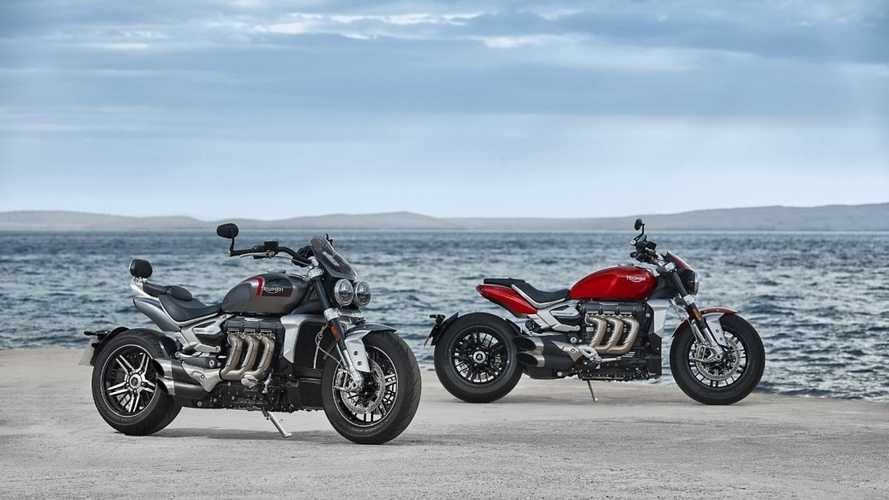 The Rocket 3 gets from 0 to 60 faster than most sportbikes.

The trend of heavyweight, high displacement motorcycles has seen a noticeable decline in the past years. Manufacturers seem to be shifting their attention towards lighter weight, low capacity, and even electric motorcycles. Not only does this make motorcycling friendlier to beginners, it also puts motorcycles as a more accessible means of transport.

Triumph Motorcycles, despite making moves to penetrate the aforementioned segment, have retained—and updated—a motorcycle that can be considered a dinosaur to some. Still the holder of the title of largest displacement motorcycle in the world, the outgoing Triumph Rocket 3 boasts an excessive 2,294cc in-line three engine. This machine is by no means a featherweight. Tipping the scales at nearly 800 lbs (that’s twice the weight of most naked bikes out there), the Rocket 3 is intimidating, and rightfully so.

As to why Triumph decided to increase the Rocket 3’s already gargantuan displacement to 2,500cc for the 2020 model year, is perhaps simply because they can. Churning out a whopping 147 ft/lbs of torque, and 145 horsepower, the Rocket 3 propels itself, well, like a rocket. It’s claimed to go from 0-60 miles per hour in around 3.2 seconds. Or does it?

Apparently, a Triumph test rider smashed Triumph’s internal 0-60 record during a track event in Spain in October of last year. The unnamed pilot was able to commandeer the Rocket 3 from 0-60 miles per hour in a blistering 2.73 seconds. 2.73 seconds on an 800 pound cruiser is definitely a performance to brag about.

However, the Rocket 3 isn’t impressive solely because of its 0-60 time. Triumph test riders and Rocket 3 owners alike have praised the bike’s cornering ability. Of course, it’s no sport bike, and it wasn’t designed to carve corners on the race track. Nonetheless, its riding characteristics have been likened to that of the Speed Triple, rather than that of a cruiser.

The Triumph Rocket 3 indeed punches above and beyond its class in terms of performance. But then again, isn’t the Rocket 3 in a class of its own?