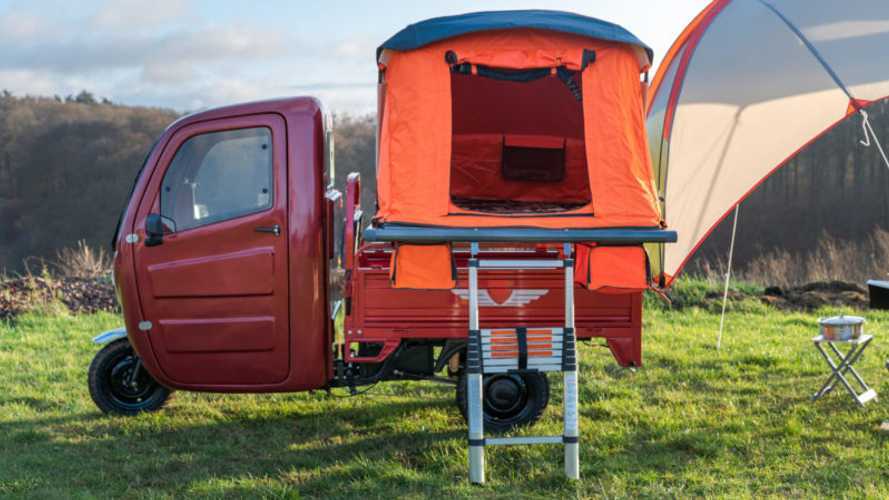 What is it? An electric scooter? A tuk-tuk? Motorcycle #vanlife?

Many of us enjoy moto-camping. I've done it many times. As I've gotten older, though, I've come to appreciate the creature comforts of home that don't fit well on the back of a motorcycle. I recently bought an old conversion van to camp in and take the bike, as well as my creature comforts, with me. If I was in Germany, though, I'd look into a unique solution that German manufacturer Elektro Frosch is offering: an electric tuk-tuk with a camper on the back.

Motorcycle Camping: It's In Tents!

Weekend WTF: I Have An Obsession With Tuk-Tuks

Elektro Frosch, which translates to "Electric Frog," offers this unique version of their E-van that includes a fold-out tent as you'd see on an overland rig, a canopy, and a complete kitchen setup, including a stove, that slides out the back of the truck bed. I've watched way too many #vanlife videos while coming up with ideas for my own camper van, and while I still need to add nearly all of the amenities to my own beast, this little electric wonder already has everything you need.

Don't expect to take any long road trips, though. Elektro Frosch claims only a 37-mile range, though they say some customers have reported trips as long as 62 miles. The electric motor produces only 3.4 horsepower, and the camper's top speed is only 25 mph, making it completely unsuitable for the wide-open spaces of North America.

The idea does have merit, however. You won't find a smaller camper van. I could park this and my Subaru together in less space than my van takes up by itself. Obviously this camper is great on gas mileage because it doesn't use any, unlike my van's thirsty V8. When you're not camping, the camper kit is removable, and you're left with a small electric pickup truck for doing all kinds of pickup truck things. The limited range keeps you from venturing too far from home, but if you live in an area with local parks, you may not need to go too far to get away from it all.

The Elektro Frosch isn't available in North America, nor would it be practical here. I'm sticking to my big gas-guzzling camper van plan. I can definitely see the appeal of this, though, even looking beyond my unhealthy obsession with tuk-tuks.