Courtney Enterprise: A Completely Different Take On A Cruiser 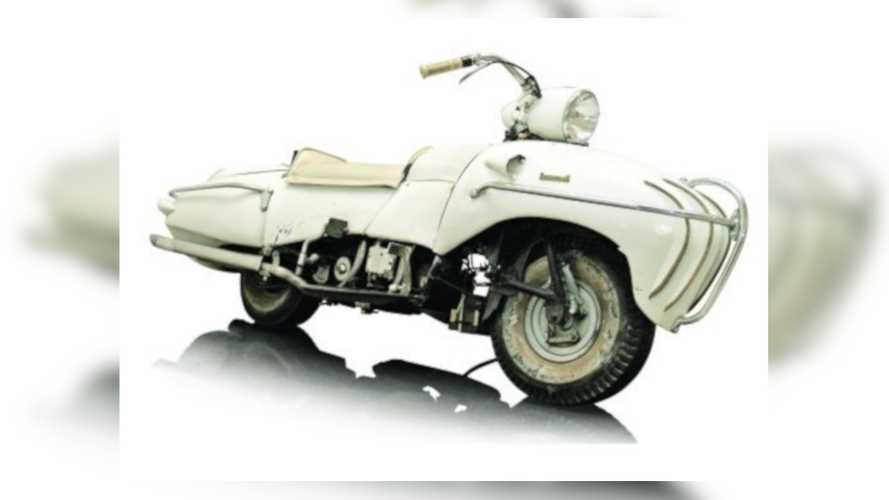 Not every bike person is a car person, or vice versa—but it probably took someone who was both to create the extremely unique Courtney Enterprise. This incredible design came from the workshop of Orley Raymond Courtney, a skilled sheet metal fabricator, engineer, and massive motorcycle enthusiast from a fairly young age. The first bike he bought was a 1916 Excelsior, but it wasn’t until he got his hands on a 1930 Henderson Streamline Model KJ that he started getting Big Ideas.

Remember how Courtney was a skilled sheet metal fabricator? By the time he got that Henderson, he had a position as a metal craftsman at GM, in the Oldsmobile Motor Works division according to Coachbuilt. The aerodynamic design of that Henderson, made possible by the inline-four drivetrain, combined in the best way with the styling of the Chrysler Airflow in Courtney’s mind.

Soon, he started sketching—and because he also had the skills to make those sketches come to life, of course he also built the thing in 1935, and patented it soon after.  The resulting round-nosed, extremely streamlined bike also featured a big, entirely appropriate Airflow-esque chrome grille. In fact, the supremely timeless art deco design wouldn’t have looked at all out of place just over a half-century later in Batman: The Animated Series—except, of course, it was a real bike that Courtney had painstakingly built in the ‘30s.

Then, WWII happened, and both Courtney and his son Ray—who’d learned metalworking from his dad—were extremely busy in non-motorcycle capacities. It’s no surprise that in 1950, the two formed their own metal fabricating business, which they naturally called Courtney-Enterprise and located in Pontiac, Michigan. The company took on all kinds of custom metal fabrication jobs for local businesses, including making racecar bodies.

That’s also when they came up with the bike later known as the Courtney Enterprise. The prototype was powered by a 45 ci Indian V-twin, but the design could be modified to accept Harley-Davidson K-engines other engines of the era. The Courtneys had visions of selling it as a limited-production model, and you can read the fascinating text of a handful of 1952 magazine articles written about it over at Coachbuilt.

It cost around $5,000 for the Courtneys to build, using an army surplus engine. That may not sound like a huge amount for a custom build in 2020, but it works out to a much heftier $48,237 after inflation. The Courtneys estimated that they could get the production cost down to $2,500 (or $24,119 in 2020 US dollars) per unit. That price wasn’t all-inclusive, though. Customers would still have to provide their own engine and transmission around which Courtney could build an appropriate Enterprise.

Unfortunately, only around three Enterprises are known to have actually been built. The prototype was displayed for a time at the Hard Rock Cafe in Orlando, Florida according to Odd Bike, but is now living in one of the company’s warehouses. The company allegedly claimed a complicated provenance involving James Dean, but had absolutely nothing to back it up. A 1952 example can be found proudly displayed at the Northeast Classic Car Museum in Norwich, New York.