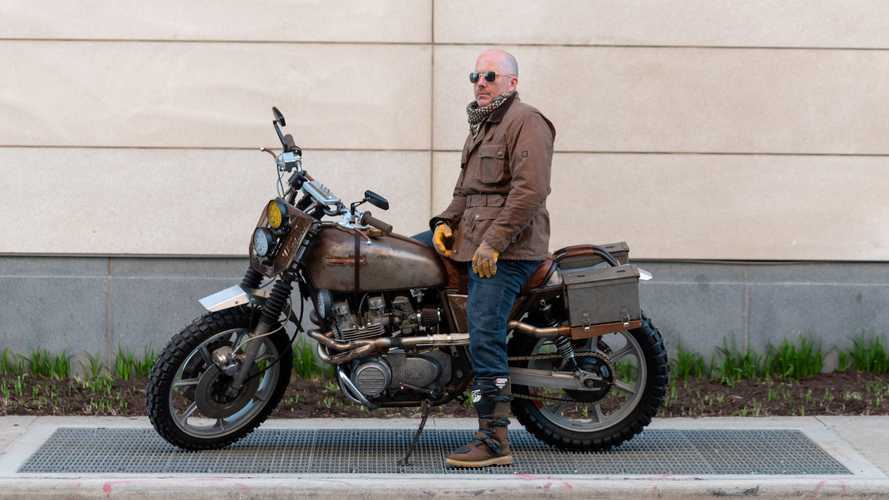 This bike looks like a prop from one of those post-apocalyptic zombie movies.

The custom motorcycle scene is chock full of builds that seem to defy rationality. From builds with downright preposterous designs, to heavily themed builds, and resto-modded classics, you’re bound to find something that suits your fancy. Equally charming as the bikes themselves would be the builders—the folks who poured countless hours of work out of love and passion for motorcycles. The struggles, challenges, and sudden changes of plans add to the already colorful character surrounding these individuals.

Brent King, the founder of Mifune_Werx, shares the story behind one of his greatest creations: a backyard built, dystopian-themed Kawasaki KZ650. What started out as a pile of old motorcycle parts purchased from a recently-deceased acquaintance would end up being the foundation for one of Brent’s most notable builds. After acquiring a frame, a couple of engines, and a bunch of old tires, Brent envisioned that he would be building a custom scrambler. Whilst out searching for more parts for his build, he came upon a ratty old KZ tank. Whilst sandblasting it, he noticed the patina underneath the white primer and instantly fell in love with it. So much so, that it dictated the theme of the entire build.

Brent explains that he combined design elements of a classic scrambler, mated with post-apocalyptic and steampunk design elements. He goes on to explain how he built the bike and did his best to ensure every little detail remained true to the bike’s design philosophy. By using distressed metal and leather, he crafted the fenders, headlight assembly, and storage compartments to stay true to the theme. A set of bright LED lights adorn the front end and sides of the bike, ensuring its ability to traverse even the darkest rods with utmost confidence. A set of metal panniers that perfectly fit the look and feel of the bike enable it to be a cross-country tourer, should Brent ever feel the need to travel out of town aboard his post-apocalyptic machine.

Of course, aesthetics comprise merely a fraction of the build. Luckily for Brent, one of the engines he acquired was in remarkably good shape, needing nothing more than a simple valve job and some cylinder honing in order to get up and running. The frame he purchased was sandblasted and prepped for painting. Since the parts he purchased didn’t come with any wiring or electronic components, he did the wiring himself, setting up a Moto Gadget M-Unit to manage the electronic ignition system, new coils and wires, and a custom aluminum electronics box under the seat.

It can be argued that builds like this keep things fun and interesting in the custom bike scene. In the slew of heavily modified and high-budget custom bikes, it comes as a breath of fresh air to see such a simple, yet striking build that was put together out of a pile of spare parts.