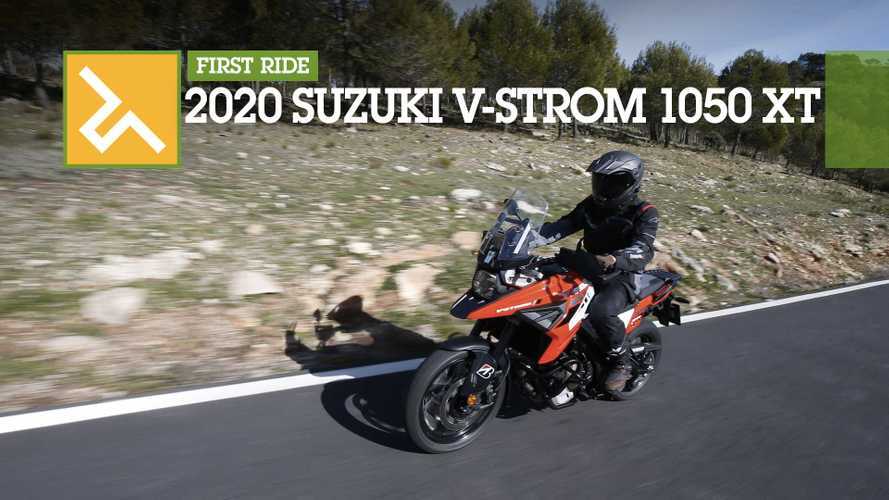 We tested the updated Suzuki in Marbella. Here’s how it performed on and off the road.

Dedicated globetrotter injected with off-roading DNA, the Suzuki V-Strom 1050 XT is Hamamatsu’s new sport enduro tourer flagship. It enters 2020 with numerous upgrades, several of which can be spotted with the naked eye.

Where the design upgrades truly stand out is in the redesigned beak and the new headlight, reminiscent of the DR-Z and DR-Big of yesteryears, hitting the nail of nostalgia right on the head. The windscreen itself is also updated on the XT, and can be adjusted in 11 different positions without using tools to a maximum height of 50mm (1.96 inches). That’s no all, the updates extend beyond the windshield

In addition to the LED taillight, there is a new LCD instrument cluster. The display is clearer than its predecessor and can be controlled using the controls located on the left-hand-side cluster.

The bike’s measurements and ergonomics have also been modified. The saddle remains positioned at 855 mm (33.6 inches) from the ground but with the XT, it can now be lifted by up to 20 mm (0.79 inch). There’s a new aluminum handlebar with adjustable sections as well as new wider footpegs. These ergonomic changes result in a very comfortable riding position.

The liquid-cooled 1,037cc V-twin remains unchanged but does receive a 6 horsepower upgrade. Power is now rated at 107 hp at 8,500 rpm and 73.8 lb-ft of torque at 6,000rpm. The powertrain was updated with a ride-by-wire throttle and larger individual throttle bodies, a lighter alternative to the mechanical version meant to improve the throttle response and efficiency.

Suzuki swapped the old IMU for a new 6-axis unit with cruise control, Suzuki’s Drive Mode Selector that offers three different engine mapping, Hill Hold Control that helps the rider takeoff on slopes, Slope Dependent Control that keeps the rear wheel grounded when going downhill, as well as Motion Brake System, and Traction Control with three settings. These changes were made almost exclusively to the XT, which is the model we got to test.

Let’s state the obvious: the Suzuki V-Strom 1050 XT, just like its predecessor, remains one of the most pleasurable enduros to ride on the road. It’s light and intuitive enough, with decent power in the mid-range, and it’s extremely reliable.

I noticed the changes made to the V-twin from the onset as we hit the winding roads surrounding Marbella. The electronic throttle improves the acceleration and helps the engine rapidly reach the mid to top range. However, by pushing the peak up by 2,000rpm compared to the previous V-Strom 1000, it makes the bike feel a little weak at low rpm, especially when you have to rely on it to pick things back up when coming out of a curve in a higher gear.

The Motion Brake System—not to be confused with cornering ABS—is very efficient. Its interventions are sharp but clean and don’t feel invasive. Above all, it doesn’t get in the way or makes things worse for the rider. The Hill Hold Control is pretty useful and it automatically intervenes to ensure uphill stops and takeoffs go over smoothly.

The three riding modes take advantage of the engine’s full power band but adapt the output to the selection. In my opinion, the best setting is in Mode B that makes the bike both extremely smooth and powerful. Comparatively, Mode A makes the throttle more nervous and determined, with a bit of an “on-off” effect in lower gears while Mode C is useful in the rain or off-road for the less experienced riders.

The three-level traction control is also new. We had the chance to put it to the test on the off-road course using the first, lowest setting, which allows for a constant output without abruptly cutting the engine off. The V-Strom 1050 XT proves its versatility as soon as the tarmac ends. It is always very composed and manageable on the road and in the dirt but it’s ready to up the ante for the more experienced riders.

The bike’s suspension does some solid work with the well-known adjustable 43mm Kayaba inverted fork at the front and the preload-adjustable single shock at the back. The fork gives plenty of feedback and makes the bike feel well grounded. The rear shock achieves the difficult task of complimenting a more enthusiastic style of riding nicely without being too stiff. The 19 and 17-inch Bridgestone Battlax Adventure A41 tires deserve a special shout out for their impeccable behavior on all the surfaces we experimented on.

The V-Strom is a tireless tourer and the new footpegs and saddle make it even more interesting. Off-road, the height of the new handlebar might become tiring for the taller riders (I stand at 6’1”) but it makes up for it on the road by shaping a perfect riding geometry that gives the rider a lot of control, a set up that is consistent with the bike’s role in the lineup.

In terms of fuel economy, during our test, we achieved an average of 36 mpg, compared to Suzuki’s claimed 47 mpg. The discrepancy could be explained by the almost complete absence of high-speed, freeway sections on our route of the day.

The new LCD display is easy to read and to use and along with the new headlight, is the bulk of the changes made to the Suzuki flagship. The V-Strom 1050 XT isn’t offered with a color TFT or with Bluetooth connectivity and it doesn’t need these features to prove what it’s capable but because it’s measuring up to the Honda Africa Twin and the BMW R 1250 GS, the upgrade would be a welcome addition.