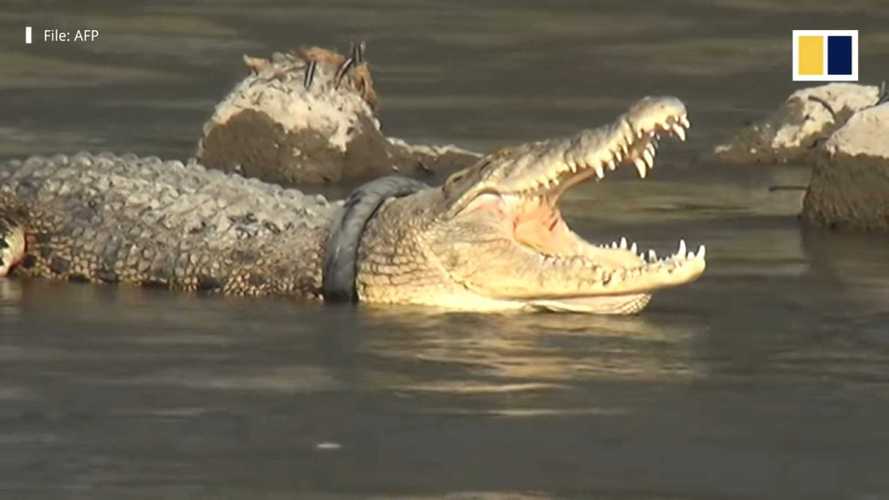 "A reward will be given to anyone who can release the hapless reptile."

In Indonesia, Central Sulawesi’s Natural Resources Conservation Office is holding a rather unusual contest. The goal is to remove a motorcycle tire from a wild crocodile's neck.

No one knows how the tire got there, but sightings of the big croc wearing a tire necklace go all the way back to 2016. The conservation office does not have the resources to track and capture the crocodile itself, so it has turned to the public for help. This may seem silly, but it's no laughing matter. Even though the croc is already 13 feet long, it is still growing. Tires tend not to grow, and conservationists fear that it may eventually strangle the poor croc.

So far, this crocodile seems to be doing okay. Not only has it already survived for years with a tire necklace, but it has also survived an earthquake and tsunami that struck the island in 2018.

This is not the first time people have tried to rescue the croc from its rubber ring. Government officials and conservationists have tried several times before but failed. Wild animal tamer Muhammad Panji, more commonly known as Panji Petualang, has also tried but was not successful. They've even brought in Australians, who are quite accustomed to working with animals that will try to kill you, but even they have failed. If only Steve Irwin was still with us to put his crocodile hunting skills to use to help this croc out.

There is a reward for successfully removing the tire from the crocodile's neck. No one has said exactly what it is, though. It could be anything from money, to a free motorcycle tire (slightly used), to a year's supply of Rice-A-Roni, the San Francisco treat. We don't know. What we do know is that the croc tends to hang around the Palu River and Palu Bay areas. Not that we'd ever encourage you to go wrestle a wild crocodile, of course.