The Manic Energy Of The Custom Droog Moto E-Fighter 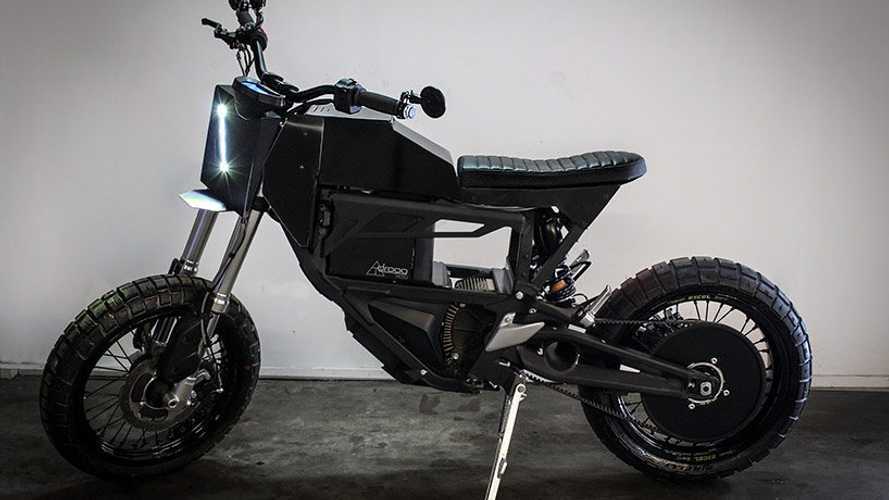 Electric motorcycles are beginning to gain mainstream status with new models popping up left and right. Ranging from sport bikes to dirt bikes and everything in between, these silent newcomers represent the future of motorcycling as we know it.

One bike in particular stands out in the sea of high-speed electric sportbikes proliferating in the market today. The DM-016 E-Fighter is a retro-styled, fully electric streetfighter by online-exclusive American manufacturer, Droog Moto. Producing an instantaneous 46 horsepower and 78 foot-pounds of torque, its performance figures are close to those of popular gas-powered supermotos by Husqvarna and KTM. As far as battery options are concerned, the DM-016 E-Fighter comes with either an interchangeable 3.6 modular setup or a single 7.2 battery. Regardless of battery option, the bike comes standard with Zero’s 550 Amp high-efficiency controller with regenerative braking.

The DM-016 E-Fighter is dressed in black and gives off an aura with a sense of mystery. Complete LED lighting ensures optimum visibility at night, and a blue backlit LCD dash displays information clearly. Its bodywork boasts handcrafted parts made out of aluminum and steel and is built to give off a retro, yet modern look and feel. It sports an otherworldly fascia with asymmetrical lines that look like gashes from the claw of a wild animal as headlights. Droog Moto also offers customers a choice of either cast-aluminum wheels, or their new tubeless custom spoke setup. Both options come with rugged tires capable of handling almost any terrain. To further aid the bike’s go-anywhere ability, long-travel inverted forks adorn the front end, while a preload-adjustable monoshock is hidden behind the rearward bodywork.

How do you feel about this bike? What do you think of electric motorcycles in general? Do they detract from the true sense of motorcycling? It’s certain that motorcycling will inevitably go electric. It’s just a matter of how well manufacturers are able to preserve the essence of riding. Amidst all the innovations and advancements in technology, one thing is certain: motorcycles are here to stay.