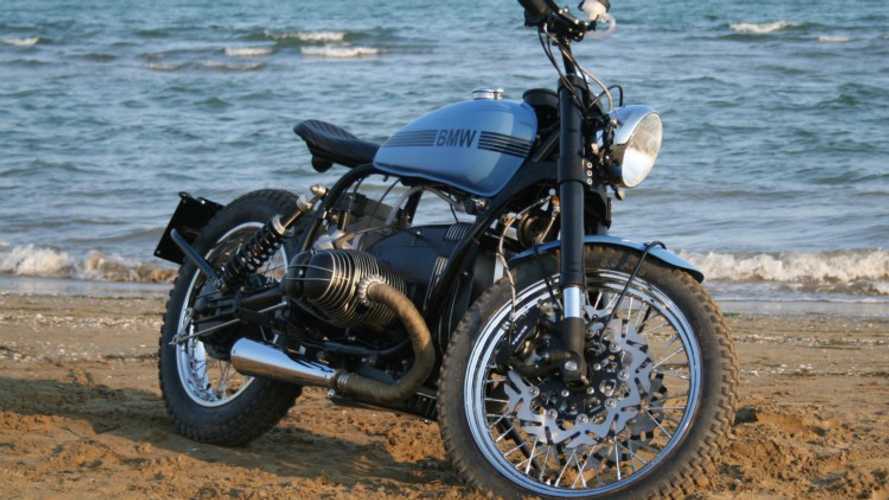 Germans have a well-deserved reputation for precise engineering, a keen eye for details, and unconventional practices that just work. BMW motorcycles are a hallmark to this statement. Standing out in a crowd of similarly engineered motorcycles the world over, most of their models employ rather unconventional engine and suspension layouts. Since the 1920s, BMW has been using flat-twin engines. Colloquially referred to as boxer engines—because of the way the pistons are situated in a horizontally opposed manner—these engines are known for their low center of gravity, resulting in a very stable ride and punchy power delivery.

Undeniably, BMW motorcycles have gained mass appeal in the custom bike scene, with nearly all models having been worked on by designers all over the world. One particular bike that stands out is a 1983 BMW R80 in a stunning Mediterranean Blue finish, by La Motocicletta of Italy.

But wait, why is an Italian designer working on a German motorcycle? Aren’t there a lot of Italian motorcycles with even more character than the seemingly vanilla R80? That may be the case, however, shop owner Massimo Zancai definitely saw something special in the BMW. Holding a master’s degree in design, Zancai has a keen eye on shapes, color, and aesthetic design in general. He states that the BMW has the potential to be a mix of harmony shapes—implying a strictly stylistic point of view in choosing this bike. Additionally, he states that he sees this bike as a great opportunity to express himself in an uninhibited manner, as opposed to customer bikes wherein he has to deliver the wishes of his clients. As such this custom BMW R80 represents something bigger than itself. It represents the face of Zancai’s shop: a testament to his art.

This motorcycle’s beauty, however, is not merely skin deep. In as much as it is eye-catching, it certainly walks the walk in terms of functionality. Adorning the front end are inverted Showa front forks adjusted to their lowest possible setting, giving the bike a modern, hunched over stance. A YSS monoshock is prominently displayed outback, while bespoke CNC footpegs and controls add a touch of sophistication to the bottom end of the bike. Lastly, a one-off fuel tank meticulously smithed by Zancai and his team sits proudly front and center, coated in a lustrous Mediterranean Blue.