Custom Builder Morphs A Harley Bobber Into A Desert Scrambler 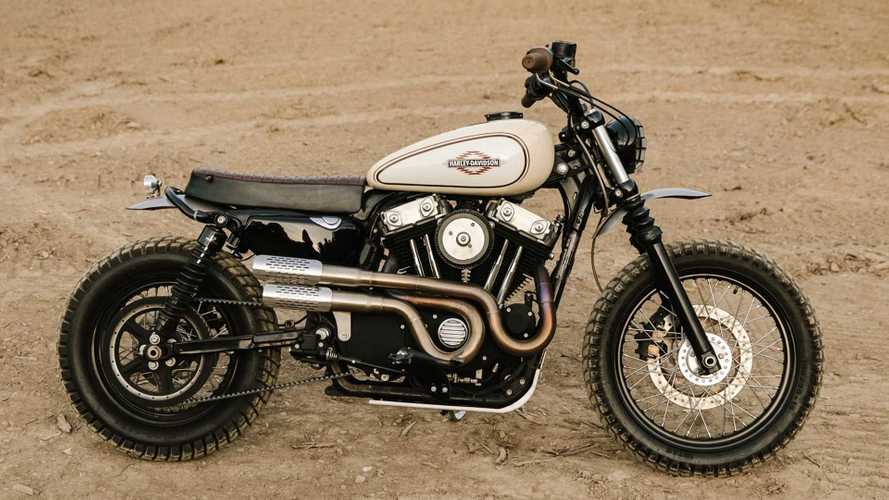 Hard on the trails, easy on the eyes.

Scramblers have been experiencing a renaissance over the past few years. The success of the Ducati Scrambler (and it’s many iterations) and the introduction of Triumph’s Scrambler 1200 prove that riders are still attracted to the scrambler style. Traditionally built from a street motorcycle, scramblers of the past were achieved with the addition of taller suspension, a high-mounted exhaust, and a pair of knobby tires. When Pittsburgh-based artist and builder Kurt Diserio stumbled upon a wrecked 2015 Harley-Davidson Sportster 48, he knew he could bypass all the newfangled bells and whistles of modern scramblers and create a proper throwback.

Don't Call It A Comeback:

Working with his father Paul, Diserio set out to transform the 545-pound Harley bobber into a scrambling machine with a desert race theme. First, he replaced the stock shocks with extended Progressive units, swapped in a set of Burly Brand Scrambler handlebars, and added a custom raised exhaust to get the pipes out of harm’s way. The father-son team knew they needed a larger fuel supply than the peanut tank equipped on the 48, so they mounted a 5-gallon tank previously found on the discontinued Sportster 1200 Custom.

To attain the scrambler aesthetic at the front of the bike, Diserio bolted on a PIAA headlight and a raised front fender. Out back, the team lopped off the Sportster’s extended fender struts and welded on a tail loop with a trimmed rear mudguard. Of course, it’s not a scrambler without a bench seat, and the one-off two-toned piece on this bike comes from Chappell Customs in Nevada.

Diserio painted the tins himself in the corner of an old fabrication shop. The gas tank certainly steals the show with a Nez Perce rendition of the Harley-Davidson bar and shield and brown pinstriping gracing each side. On the top of the tank, a painted scorpion clearly resembles the amber fossils found in gift shops throughout the American Southwest.

Tasteful additions like a Mooneyes derby cover and throwback rocker box covers complete the retro build. Like most scramblers today, Diserio knows that his Sportster is more of a design exercise than an off-road rumbler.

“People have asked me about taking it off-road,” said Diserio, “and while it’s been fun slinging it around in the dirt, the Desert Rat still weighs a little too much and is geared too high to truly get wild on the tight trails around our area.”

As long as the scrambler trend continues, we hope to see more custom builds with a balance of design and character like Diserio’s Desert Rat.