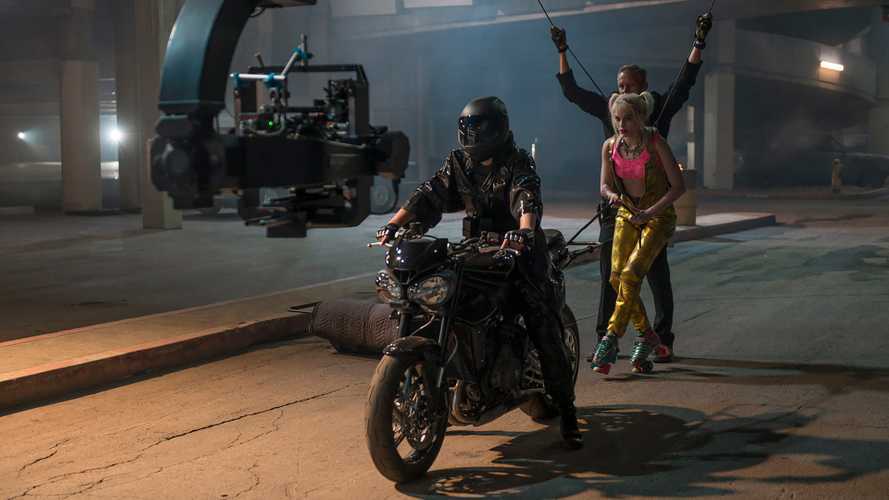 Edit: So the model used in the movie isn't the 2020. With the new RS launched in October and no model-year identified in the press release, I did math that didn't work out. Sorry for the confusion and thanks to those who pointed it out.

There’s a love story shaping up between Triumph and Hollywood. In December 2019, the British manufacturer confirmed that two of its bikes had supporting roles in the new adventures of Agent 007. The all-new Tiger 900 and a specially-prepared Scrambler 1200 shared some screen time with mister James Bond himself. This time, Triumph is visiting the DC universe by putting one of the ladies from Birds of Prey in the saddle of a Street Triple RS.

Don’t call her Mister J’s lady; Harley Quinn is getting her own spin-off movie and she has every intention of kicking some butts. In Birds of Prey, Quinn deals with her breakup from the Joker by teaming up a gang of badass ladies that includes Black Canary, Huntress, Cassandra Cain, and Renee Montoya to fight evil in a perfect anti-hero kind of tale. The best part about the premise is that the token bad guy, Roman Sionis, nicknamed Black Mask, is played by none other than our Long Way Round, Up, and Down pal, Ewan McGregor.

When the leather and the eyeliner aren’t enough, how do you make a lady look extra badass? You put her on a motorcycle, of course. In this case, Huntress gets to do the honors and her stealth black ride isn’t just any ride. She gets to take a Triumph Street Triple RS for a spin.

The movie Birds of Prey featuring Ewan McGregor, Margot Robbie and of course, the new 2020 Triumph Street Triple RS will land in theaters on February 7, 2020.