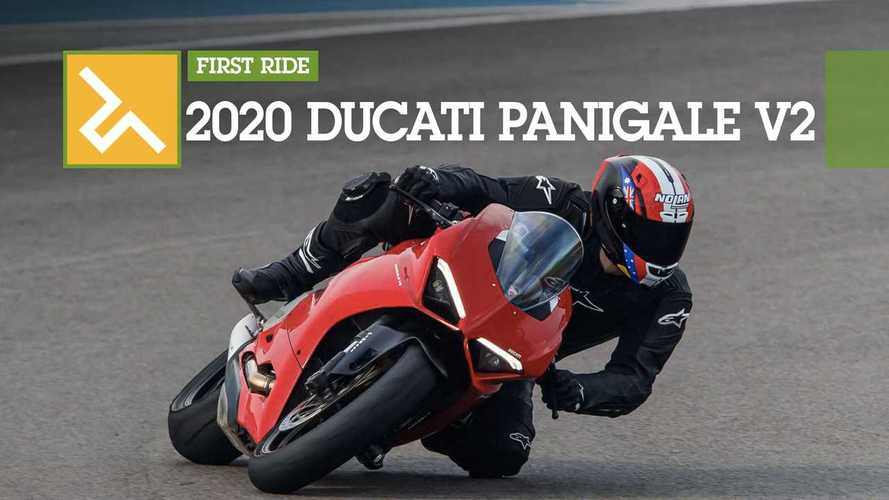 Our colleague Duccio Rasoini of OmniMoto got to take the all-new Ducati Panigale V2 out on the track. Here’s what he has to say about the baby Pani.

There’s a magnetic effect that connects the rider to the new twin-cylinder Panigale. It’s like there’s a profound understanding between man and machine that stems from a riding position that puts the rider in control of the situation. It creates a perfect harmony between the engine, the rider, and the electronics.

After The Panigale V2, The Ducati Streetfighter V2?
⠀

The All-New Ducati Panigale V2 Is Here And It's Adorable

It’s impossible to be unmoved by the look of the Panigale V2. The design is inspired by the V4 flagship, particularly in the fairing where a set of new air ducts creates a dynamic and aggressive effect. I would even say that the lines and shapes look more harmonious on the V2, thanks to its smaller stature.

The fairing is typical of a Ducati, with the clean surfaces contrasting the sharp angles of the boomerang-shaped extractor that accentuates the model's athleticism. The racing saddle ends on a red tail-end, topped with a pillion seat. There is an optional seat cover available that streamlines the silhouette.

There’s a refinement in how the exhaust respects the width of the motorcycle by hugging the belly of the engine and ends on the elegant silencer. This layout is a notable improvement over the dual-exhaust design adopted on the previous 959 that hid the rear wheel. Thanks to the new single-sided swingarm that gives the V2 a real Italian superbike look, the design of double five-spoke wheel can now be fully appreciated.

The Baby Panigale might be a cheaper and simpler option than the V4 but it is an authentic Italian sportbike full of potential and loaded with high-end technologies.

The new Panigale’s beating heart is inspired by the 959’s Superquadro engine. The block’s architecture remains unchanged; a liquid-cooled, DOHC Desmodromic L-twin, adapted to the bigger 955cc displacement. Each cylinder is outfitted with two injectors and gas is vented through a more efficient airbox. Despite the Euro 5 emissions, the engine’s output was increased and is now rated at 155 horsepower at 10,750 rpm and 76.7 lb-ft of torque at 9,000 rpm. The engine is mated to a slipper clutch and the quick-shifter now allows for clutchless upshifts and downshifts.

Don’t be fooled by the new Panigale V2’s “middleweight” label—the engine is spectacularly capable. It might be short a few dozen ponies compared to other superbikes, but let me remind you that the street-legal version of the championship-winning 999 produced 143 horsepower. At the time, that was enough power to send a shiver down the most demanding enthusiasts’ spine. Granted, the electronics and tires have since improved by leaps and bounds, but the new Superquadro deserves our respect nonetheless.

The electronics have clearly evolved, thanks among other things to the introduction of the Bosch 6-axis inertial measurement unit that enabled the addition of cornering ABS with slide by brake functionality, just like on the V4. The system can assist the rider should there be a loss of traction detected in the corners and it manages traction control, anti-skid, and engine braking. The bike uses a ride by wire throttle with multiple mapping options (race, sport, and street).

The V2 is built on an aluminum monocoque chassis that uses the engine as a stressed member and acts as an airbox. The use of a 21-inch single-sided swingarm is a beautiful innovation. It is paired with a Sachs monoshock with five inches of travel. At the front, support is provided by a 43mm Showa USD Big Piston fork with 4.72 inches of travel.

The Panigale V2’s stopping power is provided by a pair of 320mm semi-floating discs teamed with a set of Brembo four-piston monoblock calipers at the front and a 245mm disc with a Brembo two-piston caliper.

The V2's proves that Ducati can make a model athletic and agile without going to extremes. Rake angle is set at 24 degrees, the trail and wheelbase measure respectively 3.7 and 56.5 inches, and the bike tips the scales at 440 pounds wet. To optimize the bike’s behavior both on the road and on the track, the wheels are wrapped in a set of Pirelli Diablo Rosso Corsa II tires sizes 120/70 and 180/60.

It was hard to remain objective about my experience in the saddle of the new Panigale V2 after countless laps on the track at Jerez. I stood there, gawking, analyzing the bike from wheel to wheel, trying to figure out what the secret recipe behind such a charismatic, easy, rigorous, comfortable, and even fast motorcycle was. This Ducati has bewitched me. It turned out to be a lot more fun than I expected. It followed my every command and I finished the day barely tired at all, longing to grab hold of its handlebar once again.

There truly are a lot of advantages to the V2 that complement one another which heightens the model’s potential.

Right from the start, the riding position plays an important part. The Panigale is narrow and shapely, a silhouette that perfectly integrates the riders. That is partly due to the footpegs positioned further back on the frame, placed at a distance of 33 inches from the now thicker saddle ,which improves the rider’s ability to use their body and move with the bike. The clip ons also work their magic. They are wide and have just the right angle to provide excellent control without being overly tiring on the arms and hands, even after several corners.

The motorcycle shines in the curves, showcasing an agility and precision that allowed me to continuously improve my performance, lap after lap. The experience was enhanced by the fact that the bike isn’t too physically demanding.

Braking is great because the bike’s rear end provides continuous feedback which allows me to decelerate even while leaned in, helped by the fork that absorbs the Andalusian asphalt's irregularities and keeps the front wheel from being tossed around, resulting in a smooth trajectory. The same can be said of the rear shock, unmoved even by the most enthusiastic accelerations in second gear.

The Brembo system meets all the expectations in terms of performance, control, and smoothness. It might not be as effective as a Stylema or M50 unit but it perfectly meets the needs of this Ducati.

In the bends, running in fourth gear, the V2 manages to shine even brighter, sure-footed and steady. It requires very little incentives to lean in. It doesn’t take much for me to understand that it is very sensitive and receptive to my movements; I don’t need to wrestle with the bike for it to obey. That is probably one of its best qualities and surely contributes to making the bike so effective, regardless of the rider’s abilities. It takes you by the hand, it inspires trust and forgives minor mistakes without pushing you to your limits. This is a valuable characteristic since it gives the rider a chance to relax, plan ahead, and improve their performance lap after lap.

The motorcycle’s behavior is nicely complemented by the 955cc Superquadro’s excellent nature. Torque is slightly less generous in the low and mid-range compared to other models within the lineup (for instance, the street-oriented 950 engine) but it presses on confidently after 6 or 7,000rpm. I easily got more out of the engine when I twisted the throttle.

It is the perfect playdate for the track. The riding experience becomes even better after selecting the Race mode. It increases the bike’s responsiveness without being too abrupt, not even during rapid throttle modulations. Let’s be clear: the power is there, especially at high revolutions. During takeoffs, you might want to shift your weight forward so that the wheel doesn’t lift, even in third gear.

In Sport mode, the system helps keep the front-end grounded during the accelerations. The Race mode unleashes the fun. It can send the back into a controlled waltz and make the whole riding experience ridiculously more fun, flirting with the limits without ever crossing them.