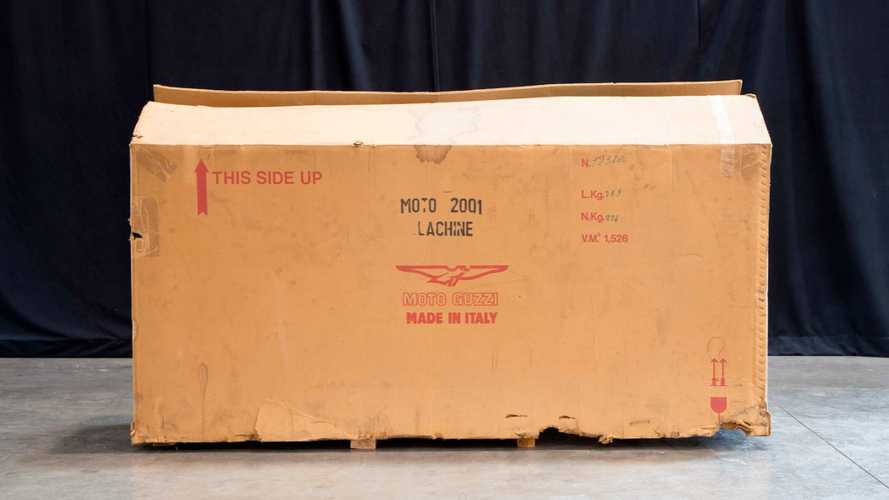 Yesterday, we told you about two Indian Larry customs heading to the  Mecum Las Vegas 2020 auction, which runs from January 21 through 26. Today, we’ve got something completely different to get excited about, and it will cross the same auction block. Folks, what we have here today is, according to Mecum’s own site, a bit of a crated 1980s-era Moto Guzzi mystery. Let me explain.

You see, it’s currently listed as a “1981 Moto Guzzi Le Mans III Crated.” According to the description, it’s part of the Musee L’Épopée de la Moto Collection, and rather excitingly, if you like Italian motorcycles, it’s one of seven crated Italian bikes listed. It’s also the only crated Guzzi in the bunch. The problem is that the photos and description are apparently mismatched. Look closely at the photos and you’ll see that they depict a 1987 Moto Guzzi Le Mans 1000, which would look very much like this after preparation.

By the time the Mandello del Lario-based factory rolled out the Le Mans IV 1000s, it was playing strictly to an audience that loved all things Guzzi and/or Italian. The company’s reputation of being something of a dinosaur among motorcycle manufacturers was already etched in stone, so it wasn’t really trying to compete with Japanese bikes of the time. The first Mk IVs entered the market in 1985 and rolled on 16-inch wheels until 1988, when the new bikes switched to 18-inchers instead.

Both the MkIII 850 written up in the description and the MkIV 1000 actually depicted in the photos would be cool purchases for Guzzi enthusiasts, but you might want to clarify exactly what you’re purchasing if you’re planning to bid on this bike. If you’re intrigued by a blind-box bike purchase, you can simply bid away at this unique opportunity.