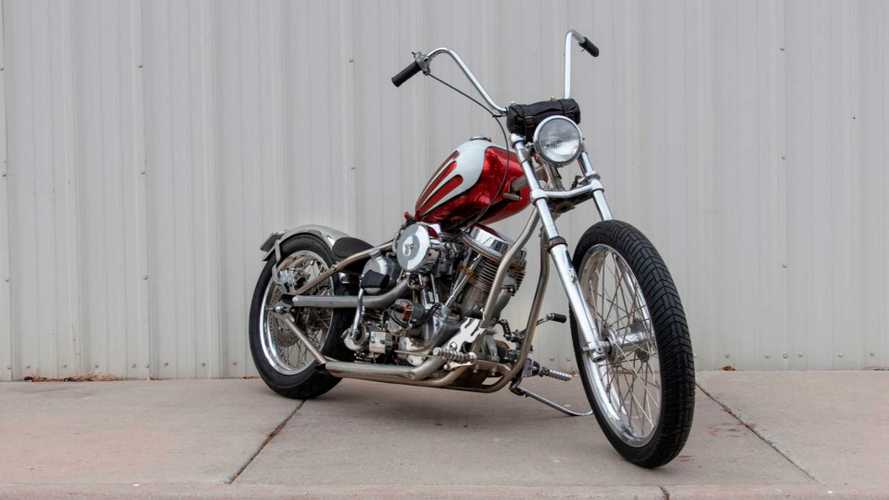 It’s been 15 years since motorcycle customizer Indian Larry left this world, and now two of his most famous works are crossing the auction block at Mecum. The Las Vegas 2020 show runs from January 21 through 26, and both his personal ride Grease Monkey, as well as his final build ever, the Chain of Mystery, will be up for grabs.

In Other Auction Action:

Perhaps most inextricably intertwined with the legend of Indian Larry is Grease Monkey. This 1956 Harley-Davidson-based build was his personal bike, built in 1998 before he rocketed to international acclaim. Once complete, it graced the September cover of Easyriders magazine, where it was seen as a callback to 1950s custom culture. The bike features a modified Paughco nickel-plated frame, Ceriani front forks, a custom seat hand-tooled by Paul Cox, and a red metal flake paint job with pearl white flames.

As a bookend, the 2004 Chain of Mystery was built on a frame made entirely out of chain links, welded together by Eddie McGarry, who used a jig to keep everything straight. The engine is a Harley-Davidson sandwich, comprised of a Panhead front and a Shovelhead rear. Are two heads better than one? In the case of this build, apparently so.

Another Cox hand-tooled saddle adorns this build, as well as plenty of details like hand-engraving on the engine and transmission, custom paint (of course), and brake rotors laser-cut with custom Indian Larry logos. This bike is being sold for the first time ever to the general public and will be sold as a display-only piece, not for highway or public road use, per Mecum.

If you’re a fan of Larry’s builds and what he accomplished during his lifetime, and you’ve got some extra holiday money sitting around, you may want to register to bid before January 21.