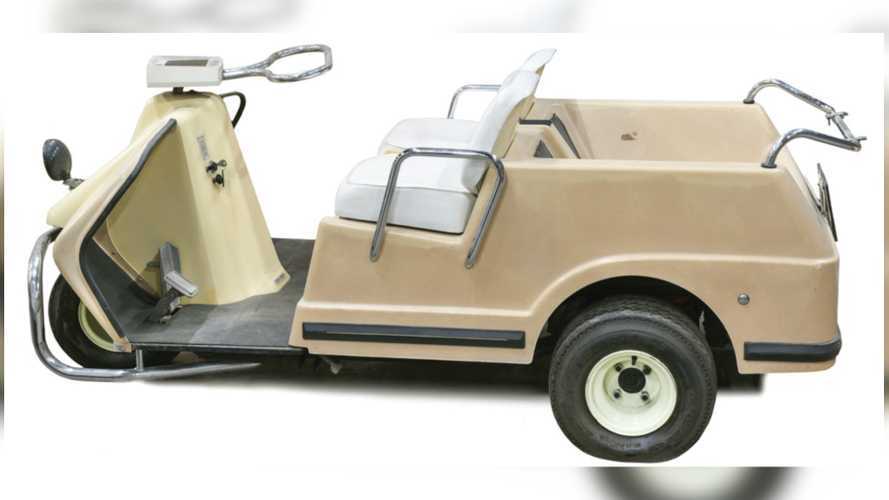 This one has three wheels!

It’s Elvis’ birthday! On this date, January 8, 2020, The King would have been 85-years young. What better way to celebrate the life and times of Elvis Presley than by bidding on yet another of his old, well-loved Harleys? No, it’s not the 1976 FLH 1200 Electra Glide that went for $800K back in August 2019. Folks, may we present to you a Harley-Davidson golf cart, once owned and used by the King to traverse Graceland’s 14 acres? If ever a golf cart could be considered a moderately cool vehicle, this might be the one.

Now, to be honest, it’s probably not ever going to end up on a list of the coolest bikes that Elvis ever owned. The relatively modest reserve price of US $30,000 set by Graceland Auctions reflects that, as does the company’s estimated selling price of between $60,000 and $70,000. Still, it’s a pretty cool piece of machinery for a serious Elvis collector.

Elvis and Priscilla Presley married on May 1, 1967. Just 17 days later, on May 18 of that year, Elvis purchased this very golf cart from Taylor Harley-Davidson in Memphis, Tennessee. It’s a two-seater, with a license plate that reads “1 Elvis.”

What’s extra cool, besides its provenance, is that it comes with documentation. Along with the cart and the cachet, you get the original sales receipt. When new, it cost $1,055.38 out the door for the King. You also get a check receipt, as well as the sales receipt from its first-ever service appointment. Some paperwork is undoubtedly boring, but not these pieces.

As the cart was used by the King to move about Graceland’s acreage, it has some “slightly worn tires and several nicks and scratches to the exterior,” according to Graceland Auctions. Since it was originally purchased in 1967, it will need a new battery to make it operational. However, prospective bidders will be happy to know it was stored indoors for its lifetime and is in relatively good condition considering its age.

If you want it, you’ll need to move fast. The auction ends at 12 p.m. EST today, January 8, 2020. Reserve price of $30,000 has not yet been met—and if you’re the lucky winner who requires shipping, an additional freight charge will be assessed.