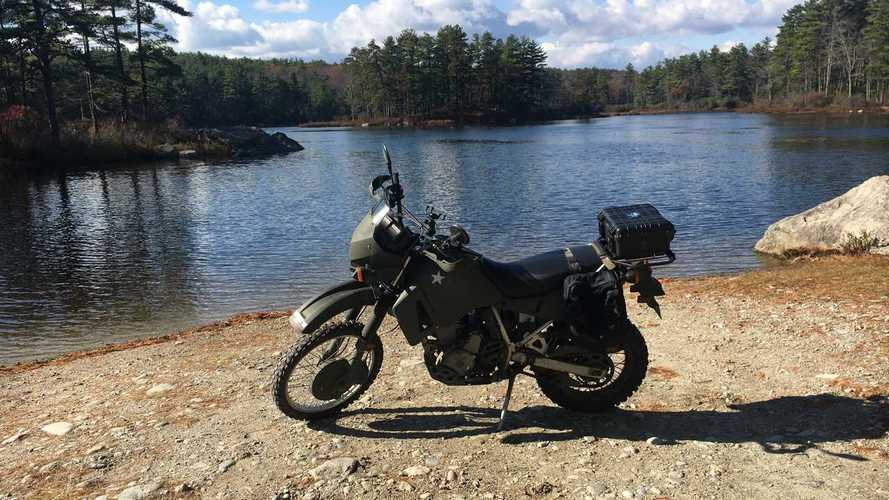 In case you hadn't noticed, it's winter. My KLR 650 is safely tucked away until warm weather returns, or at least until the snow and ice stop falling out of the sky. With the bike in my storage unit and the battery on a charger at home, I can't even fire it up and go ride a few miles on the occasional unseasonably warm day like today. (I miss my garage.) So instead of riding, I've come up with a plan of how I want to upgrade the KLR for the next riding season.

Clearly I Need The Help:

The Dunlop D606 tires I "borrowed" from Kate haven't lasted very long. Despite my efforts to put as few paved miles on them as possible to preserve them for dirt, the front is cupping badly, and the rear is wearing, too. A new set of sneakers is in order. I'm torn between two sets of Shinkos. The 705 is cheap, more road-oriented, but still perfectly capable in the dirt. The 804/805 are the big-block type, better for dirt, but should wear better on pavement than my Dunlops. I'm not sure which I'll go for in the end, but I have time to figure it out. Besides, I can always try one now, then the other later, especially with the number of miles I tend to put on in a season.

I want to take some longer trips, and hard cases will work well for that. Best of all, I already have the cases, again thanks to Kate (who I'm going to start calling the KLR Fairy). All I need is a rack to mount them on and to remove the rack for the soft cases that came with the bike. They'll also be easier to remove and leave at home if I know I'm going to be tackling some rough stuff.

I'd meant to install these at the end of last riding season, but I ran out of time. I had to finagle the bracket from JNS Engineering to fit without the bolts that attach LED light pods hitting the fairing. I made that happen and the bracket is on the bike now, but I never got around to installing the lights themselves. That'll be easy.

The places I enjoy riding often have no cellular reception, so a standalone GPS makes sense. I've been using my phone and it's done the job, but none of the apps I've tried have motorcycle specific features, such as seeking out fun twisty roads the way the Garmin can. (One friend of mine calls this "squiggle mode.") I'll likely be upgrading my tired old phone soon, and the Zumo 396 LMT-S has become quite affordable with certain online retailers selling them for far below Garmin's price. It finally makes financial sense for me to get a dedicated motorcycle GPS, and leave my phone stashed away in a pocket under riding gear.

Speaking of gear, although I like my Icon Contra 2 jacket, for low-speed off-road riding in hot weather I want to get something even lighter than that. There's no way I'm giving up the gear,  but there is body armor out there that is little more than the padding held in the proper position than the lightest mesh that will do the job and hold up to falling. It won't hold up to abrasion and road rash as well, but those aren't as major factors in the dirt at lower speeds.

This isn't an upgrade I'll be making before riding season, but sometime during 2020, I want to take an actual dirt riding course. I'm doing okay for all the reading I've done and videos I've watched, but as Sabrina learned there's no substitute for having someone who knows what they're doing share their knowledge with you on the actual bike. I'm not trying to break any speed records or enter Dakar or anything. I just want to become a better rider, and despite all my street experience I know I'm still a newbie on dirt, and I want to change that.