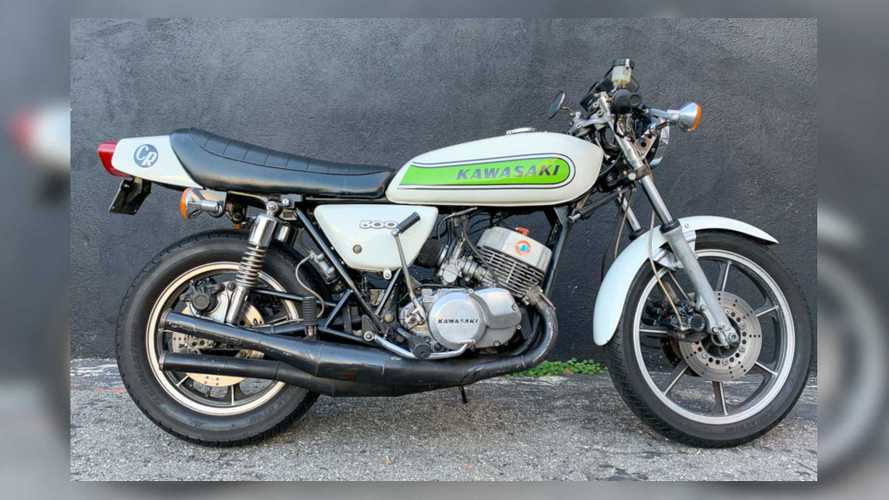 Triple threat from the past.

If you ever dreamed of owning a Kawasaki H1 Mach III, today could be the day you make that dream come true. Maybe you got a bunch of cash from family for the holidays, and you’re looking to stock up on bike parts. Why not a whole bike, especially when this 1974 example over at Iconic Motorbike Auctions is calling your name?

More Options For Your Holiday Cash:

This particular 1974 Kawasaki H1 Mach III has just 34,105 miles on the clock, which is next to nothing considering its age. At the same time, it’s also comforting, because someone has clearly been riding it, and it’s not just a zero-mile museum piece that has likely never had regular maintenance, lubrication, or tire changes.

An engine rebuild was done by Yoshi from Garage Company in 2016, per Iconic. Regular maintenance has been done by Metrik Moto in Culver City, California, and the current seller purchased this bike in 2012 from Deus Ex Machina’s Michael “Woolie” Woolaway.

This bike took the awesomeness imbued in each and every original Mach III and added KZ1000 LTD wheels, brakes, and suspension into the mix. If you’re looking for a bike to love riding and living with in a practical way, and not just a historically accurate, static piece of machinery, improved handling and stopping can only be seen as positive modifications.

Fortunately (or not), you don’t have a lot of time to pull the trigger on this auction if you want it. It ends later today, December 26, 2019. The current bid as of this writing is $6,000, but there’s an unknown reserve on this bike which has so far not been met.

Will the comparative sluggishness of your fellow enthusiasts who are recovering from huge holiday dinners work in your favor, and keep them from bidding before you get the chance? Or will the fact that an awful lot of people are off work right now work against you, because they’re home and browsing motorcycle auction sites just like you are, looking for that next bike to stuff in their garages? Only one way to know for sure.