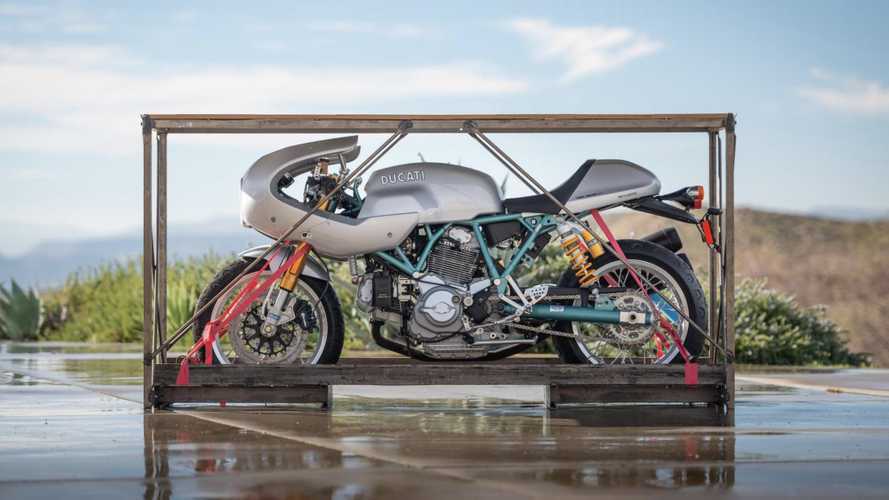 Santa, do you do motorcycle loans?

Pierre Terblanche was well ahead of his time. As a designer at Ducati in the early aughts, Terblanche created two lines that only grew in popularity over the years—the Multistrada and Hypermotard. When the company later tasked the South African designer with driving its SportClassic range, he sculpted modern-classic masterpieces that shaped the industry for more than a decade. The Ducati Paul Smart 1000LE highlighted Terblanche’s SportClassic series and a pristine, crate-kept version of the limited edition model is hitting the Bonhams auction stage on January 23, 2020.

Released in 2006, the Paul Smart 1000LE not only commemorated the racer’s victory at Imola 200 in 1972 but also Ducati’s arrival as a large capacity race bike manufacturer. Terblanche’s 1000LE retained the iconic L-twin engine layout from Smart’s 750cc race bike but increased the capacity to 992cc and threw in fuel-injection and a six-speed transmission for good measure. The single-overhead-cam, four-valve DS1000 engine produced 92 horsepower and 67 ft-lb of torque and most modern classics today follow the same power profile.

Modern accommodations didn’t stop at the drivetrain, as the Paul Smart 1000LE benefited from beefier Brembo brakes and precise Ohlins suspension. However, the bike’s styling harkened back to Smart’s race-winning bike with a turquoise trellis frame and a gorgeous silver paint job. The bubble fairing and period-correct Ducati decal completed retro aesthetic and coupled modern-day perform with cafe racer design.

Ducati only produced 2,000 Paul Smart 1000LE units and the demand for them has only increased over the years. Due to the model’s scarcity, some have appreciated in value but Moto Doffo’s specimen is the only Paul Smart left with zero miles on the odometer. The crate dweller hasn’t even started up or seen the light of day in almost 15 years.

Considering the unit’s preservation, Bonhams has placed the bid between $25,000-$33,000. While that may seem steep for a stock modern classic, we should note that Paul Smart and Pierre Terblanche himself signed the seat cowl of this particular 1000LE. If you’ve ever wanted motorcycling history wrapped up in a modern package, this may be the bike for you. Hopefully, it’s not too late to ask Santa for a loan this Christmas because you might need one to snag this retro Ducati.