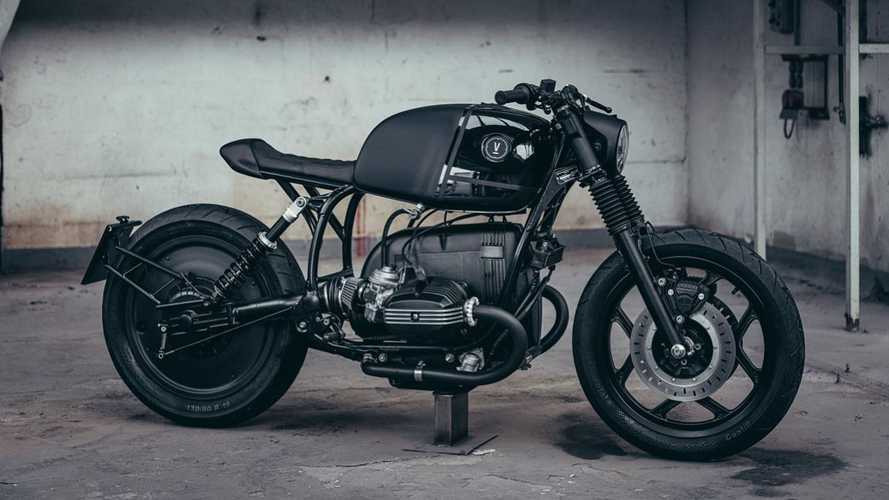 It's one heck of a transformation.

The iconic BMW “Airhead”—motorcycles powered by the air-cooled, horizontally-opposed twin engine, the staple of BMW motorcycles for 40 years—is currently experiencing a resurgence in popularity. Once the sole provenance of stodgy old “BMW guys,” these bikes are now highly sought after by younger riders. They’re prized both as reliable, rideable antiques, and also as a great starting point for a custom, like Vagabund Garage’s “V12.”

Lest you think this is some kind of Frankenstein “V12” in the traditional sense (a 12-cylinder engine in a V configuration), it’s not. That’s just their naming scheme, and this is the 12th custom motorcycle to leave the Austrian shop’s floor.

This bike started life as a 1994 R100RT, an air-cooled, 1000cc opposed-twin BMW with a full front touring fairing on it. While reliable, these bikes were extremely front-heavy and the brakes (or lack thereof) can come as a bit of a surprise to someone used to modern motorcycles. Vagabund garage has stripped that huge fairing off, de-tabbed the frame, pared the bike down to its essentials, and finished it all in matte black paint.

The rear wheel cover is made of fiberglass-reinforced plastic, and everything else you see that is obviously not a stock BMW part has been 3D-printed: the rear end, the front fork cover (which also holds integrated LED turn signals), the headlight housing, the switchgear housing. All of the lighting is upgraded to LED.

The forks have been shortened from stock to give the bike a bit more of a “hunched over” look and, presumably, to quicken turn-in. The wheels remain stock but painted. The front brake master cylinder got an upgrade, but the single-pot front calipers look like they’re original. The rear drum brake remains. Together they’re probably absolutely adequate now, especially with the extreme weight reduction this bike has undergone.

The frame has been bobbed and modified to fit the minimalist seat and tail. An upgraded YSS shock now suspends the original single-sided swingarm. The exhaust can looks stock but may not be, and is listed as “modified” by HATTECH. The matte black theme remains in the powder-coated exhaust and throughout the bike, except for a striking gloss pattern on the tank.

Vagabund seems like a custom garage to keep an eye on. Their website makes it obvious that they love to begin a custom with an airhead, but perhaps since they’re located in Austria, those old, used airheads are still a dime a dozen. The V12 is already sold and on to its new owner, but if you love what you see I’m sure they could figure out a way to ship you their next creation.