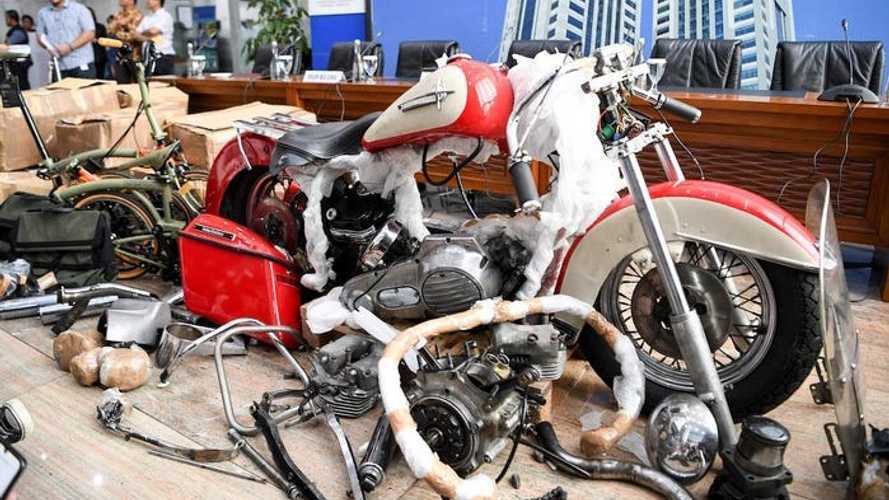 Is a motorcycle worth losing your job?

Indonesia has a vibrant motorcycle culture. From scrappy custom scooters to sculpted cafe racers, the diverse moto community even includes a President that rips around town on a bike. However, the country’s import duties levy a heavy 60-125% tax on luxury motorcycles. When the CEO of Garuda Indonesia, the national airline of the country, wanted to ship his new Harley-Davidson, he allegedly avoided trade charges by using one of Garuda’s planes to smuggle in the hog—but he got caught.

A Collection of 100 Motorcycles Crushed in Philippines
⠀

Last month, CEO of Garuda Ari Askhara snuck a vintage Harley and two Brompton foldable bicycles aboard a non-commercial Airbus flying from France to Indonesia’s capital city Jakarta. Customs officials reported finding the disassembled motorcycle and bikes earlier this week. In response to the allegations, Garuda Indonesia fired Askhara and suspended four other directors that were possibly involved in the crime.

Officials estimated the value of the Harley at $57,000. Including the Brompton folding bikes, the smuggled goods were worth $65,000. Askhara is accused of evading $106,000 in customs duties and he hasn’t publicly responded to the allegations yet. Along with the open investigation, the Indonesian government already fined Garuda airlines for not disclosing the classic cruiser and bicycles on the plane’s cargo manifest.

While the Harley tank badge points to an early-’60s model, the engine’s rocker box covers aren’t the smooth Panhead units of the time period. Adding to the confusion, the branding on the tops of the hard bags is an AMF-era logo. Along with the squared-off oil tank, our theory is that the bike is an FLH Shovelhead, but please take to the comment section if you’re able to solve this motorcycle jigsaw puzzle.

For now, Garuda Indonesia has designated its CFO Fuad Rizal to assume Askhara’s CEO responsibilities. Though the smuggled Harley is a beautiful vintage bike, we understand why Askhara would want to avoid the taxes and fees—we’re just not sure it was worth his job.