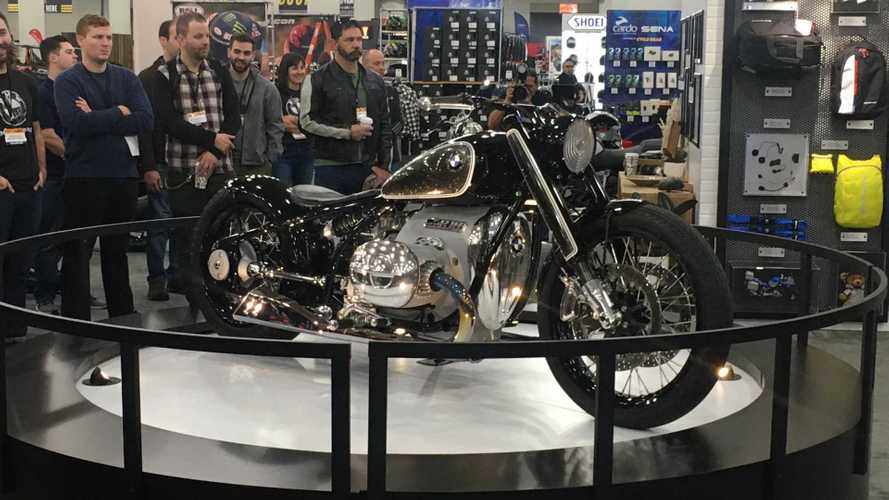 Although the show is smaller than last year, it's well worth checking out.

The New York City stop of the Progressive International Motorcycle Show circuit is this weekend, December 7 and 8, 2019, at the Javits Center. The show officially opened on Friday, and RideApart attended the press preview in the morning. Here's what you can expect from this year's event.

Non-Riders Can Experience Riding At IMS

Unfortunately, it is true that several major manufacturers are not attending the show this year. Local dealers are somewhat filling in this gap, however. Three Indian dealers have teamed up to put on a display. Although much smaller than last year's extensive effort by Indian itself, several models are on display, including the new Challenger. Even Harley-Davidson's display is smaller than last year, but you can sit on a LiveWire and even "ride" one on rollers without the risk of crashing into a shrub. I say this not to dis our Editorial Director, but to sympathize with him. I now have an all-new appreciation for just how quickly the LiveWire takes off. You can even see the upcoming Bronx and Pan America, but only from a distance because they are encased in clear display panels.

KTM also has no official presence either, but despite that numerous models are still available to look at and sit on. Aside from Energica the Italians are missing, Royal Enfield, however, has all of their models on display as part of their effort to massively expand their American presence. BMW and the big four Japanese brands all have large displays with their latest and greatest.

Beyond the motorcycle manufacturers, numerous other vendors are there as well. Progressive can give you an insurance quote. You can get pretty much any leather or patch you can think of among the smaller vendors. Many organizations have booths there as well. The New York State Police hooked us up with kickstand pads, useful for soft surfaces or fresh pavement. I had hoped to find some information about the soon to be released North East BDR route, but unfortunately, their booth was unmanned during our press tour.

As far as riding gear is concerned, Alpinestars has much of their selection on display, as well as a demonstration of their airbag system. Sister companies Cycle Gear and Revzilla have extensive displays and can help you find the gear that you need. Ladies, although they didn't bring any women's gear to IMS (Kate grumbled appropriately on your behalf), they can get it for you. Talk to Joanne at Revzilla. She knows her stuff.

Finally, Discover the Ride is back for its second year at New York IMS. We've written about this before and how it's a great way for non-riders to learn what riding a motorcycle feels like. This year we got to experience the program for ourselves. More on this later.

Don't let what you've heard in the media, including us, drive you away from checking out New York IMS if you're interested. It's well worth the trip if you're in the northeast US, and a great way to check out all the bikes and gear you're interested in with no dealer pressure to buy anything. That's why despite some manufacturers believing that shows are no longer worth their investment, I think they're still a worthwhile effort. All the internet research in the world is no substitute for actually touching and sitting on the bikes you're interested in.