Someone Made This MV Agusta F3 Even Sexier 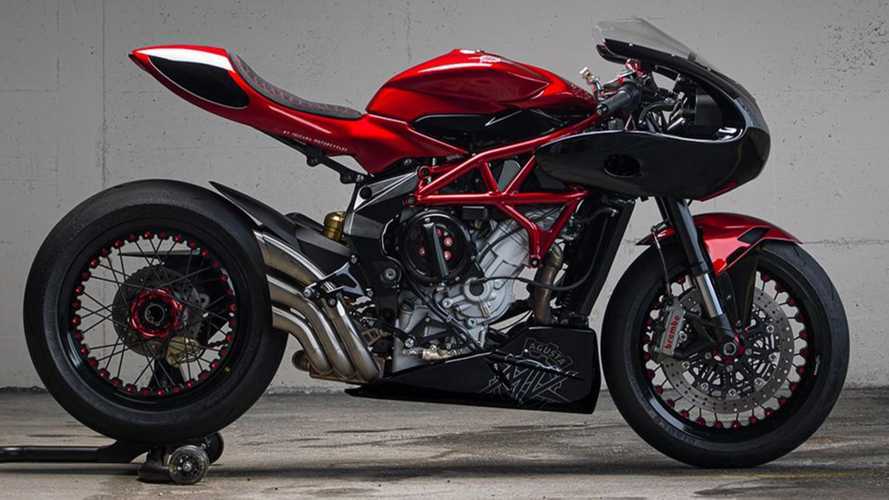 Be still, my beating heart.

If you’re wondering what the most beautiful motorcycle of all time might be, look no further. Switzerland’s Tricana Motorcycles has taken a 2013 MV Agusta F3 675, already one of the most spectacular bikes on the road, and turned it into a masterpiece.

Just Try To Take Your Eyes Off This Stunning Custom Ducati

I know I’ve used that word before. I was wrong. This is true beauty. I abandon all others as quickly as Romeo abandoned Rosaline. The bike is aptly named La Rouge (The Red) and if it wasn’t already owned by the customer who consigned the build, I’d probably move to Spain just to be close to it.

To build this custom F3 Tricana Motorcycles took a former track bike, threw out the stock fairings and subframe, and made new bodywork. They gave the stock tank a mild workover, shortening it to help maintain the lines of the new custom tail section and quilted leather seat.

Gallery: Someone Made This MV Agusta F3 Even Sexier

The retro-style streamliner half-fairing is a stroke of pure genius, moreso when you take a closer look at that headlight. It’s from an unlikely source: MV Agusta’s Turismo Veloce sport-tourer. I don’t think I’m on a limb when I say it looks much better nestled into this new home. The taillight is from a Brutale 800, and the entire subframe is custom.

A lot of custom bikes are all show and no go. Not this one. The stock F3 675 is not only a scalpel-sharp handler, but a potent middleweight triple good for 125 horsepower and 52 pound-feet of torque. It sounds like sex, too, courtesy of a 15,000 rpm redline. The stock F3 exhaust pipe setup is stunning as standard, and thankfully the HP Corse HydroTre system keeps that aesthetic.

A 2016 Dragster RR donated those spoked wheels and a truckload of CNC Racing pieces including the red wheel nuts and levers were used to bejewel the rest of the bike. Every single angle reveals new and enticing details and the finish Tricana was able to achieve is worthy of any concourse.

I’m not saying that I spent hours drooling over this bike, but I am saying that Tricana owes me a keyboard. It’s proof that a modern custom bike can be spectacular, and more surprisingly, that an MV Agusta can be made even more beautiful.