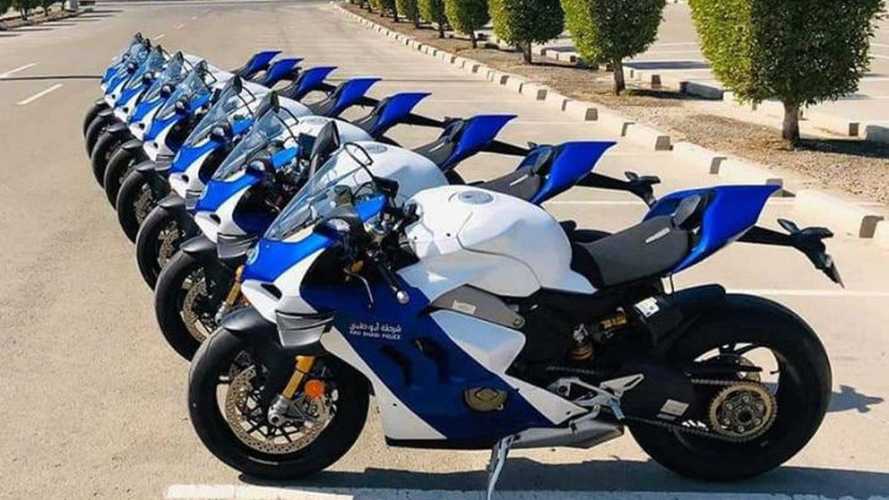 Crime in the capital city of the United Arab Emirates is relatively low. Abu Dhabi’s control over massive gas and oil reserves results in a high average income for many of the 2.9 million souls who live there. Whether the city’s affluence or the rule of law stifles crime is debatable, but that’s not stopping the Abu Dhabi police force from taking preventative measures and adding eight new Ducati Panigale V4 Rs to its fleet.

Long Arm Of The Law:

When Busas Busted You: True Tales Of The Oklahoma Highway Patrol

The Abu Dhabi PD motor pool looks more like a James Bond hideout than a government facility. With supercars like the Lamborghini Huracan, Bugatti Veyron, and Audi R8 patrolling the streets, criminals already had slim chances of outrunning the fuzz. The ADPD even recently attained the $3.4 million, 250 mph Lykan HyperSport, a car that reaches 0-60 mph in 2.8 seconds.

With all that horsepower, it seems like there would be little need for one of the most powerful production bikes in the world. However, no vehicle collection is complete without a motorcycle—or eight—and the Panigale V4 R fits in with the force’s speedy squadron.

The Ducati’s precise handling, slim footprint, and 425-pound curb weight should lend itself to patrols in urban environments, while the 998cc, 221 horsepower V4 engine will help wrangle bad guys on the run. Unless the Abu Dhabi police are chasing Rossi himself, they shouldn’t have a problem keeping up with motorists evading the law.

Like the rest of the Abu Dhabi police vehicles since 2017, the Panigale receives a white and blue livery with police decals. Aside from the new paint, the department received the V4 Rs in stock form, which includes riding modes, traction control, cornering ABS, and a quick-shifter. We’ll have to wait and see if the Abu Dhabi Ducatis will be used in any high-speed but that shouldn’t stop officers from dragging a knee on their way to coffee and donuts.