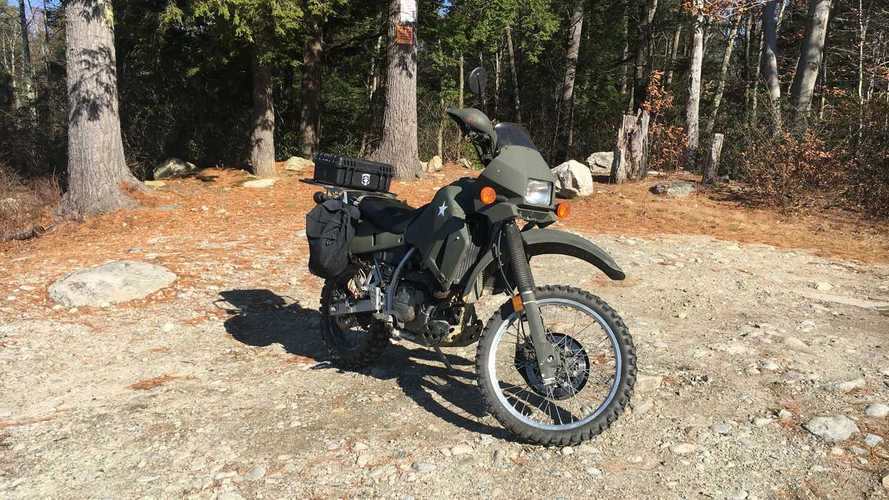 As the snow begins to fly, thoughts of next year's adventures keep me distracted.

The first significant snowfall of this winter is homing in on New England, and my KLR 650 is safely tucked away in winter storage. (Sorry, I'm not one of those die-hards who ride year-round. Besides, Kate has told me horror stories of what road salt did to her own KLR's brakes.) Rather than cry into my pillow over the months away from motorcycling that lie ahead, I'm trying to distract myself by figuring out some rides I want to take in 2020. I've already come up with five.

Our Adventure So Far:

A play on the name of the state of New Hampshire, the Hampster Ride is a route that starts in Hollis and runs all the way to the Canadian border using as many dirt roads as possible. I've already ridden the southernmost part of the ride, part of which runs only a few miles away from where I live, and thoroughly enjoyed my first taste of it. The entire 338-mile route is available on the ADVrider forum for download as GPX files. I'll probably need to take a long weekend to do this, two days up and one day back along a faster route. It means I'll probably need to try motocamping off my KLR for the first time. Bring it on.

Similar to the Hampster Ride and predating it by several years, the Puppy Dog Route is another north/south route from the Massachusetts line to the Canadian border, this time in Vermont. The Green Mountain State is a wonderfully scenic place to ride. I had a blast on a New England Riders group dirt ride through Vermont at peak foliage and would love to explore more of the state, particularly off the beaten path on dirt roads. Once again, this would likely be a long weekend trip due to the route's 385-mile distance.

Another classic New England dirt ride is the Trans-Mass Trail, which takes a circuitous route from Greenfield down to the Connecticut border. Western Massachusetts has long been one of my favorite places to ride. Though I'm quite familiar with the best paved roads out there I don't know much about the dirt, so it would be great to go exploring. This is a shorter ride at just 90 miles, so even with the time it will take to get to Greenfield and then back home from Connecticut, I could probably do this in a day.

This is not a route, but an event that typically takes place mid-July for ADV riders of all types. The 2019 event took place in Harrisville, New Hampshire. It featured several nights of camping as well as day trips at all levels of difficulty. Kate tried to bring me this year since I had just brought home my KLR, but I was already committed to working the New England Forest Rally that weekend, with rally cars rather than motorcycles. The conflicting event date is moving for 2020, however, so I'm hoping to see what the North East Adventure Rally is all about.

Most ADV riders are already familiar with the BDR, or Backcountry Discovery Routes. These are carefully curated routes through various parts of the US that provide the best each area has to offer for dual-sport riding. Their next big project is the North East BDR, which brings their journey into my neck of the woods. The route itself has not been released yet, but I would not be surprised if it incorporates portions of some of the rides I've already mentioned. I've heard great things about the other BDR routes and can't wait to try one in my backyard. BDR will have a booth at New York IMS later this week, and I'm hoping to find out more about this route there.