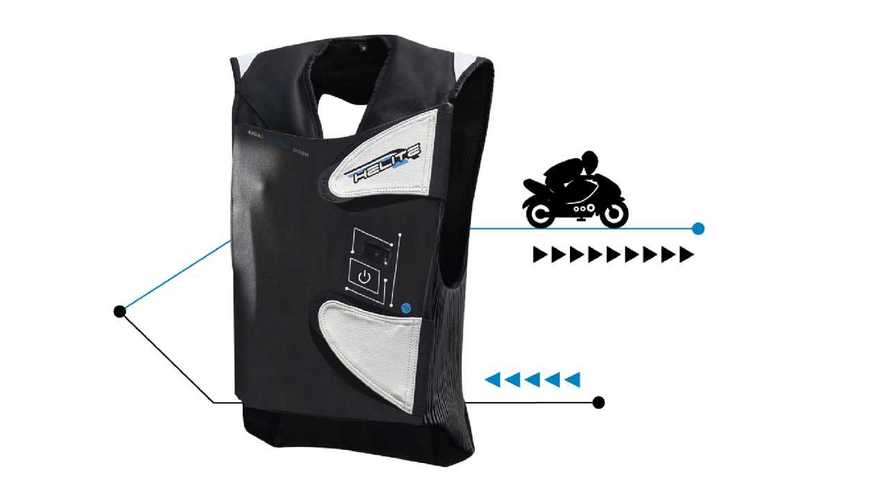 Helite has been making backpack style airbag vests and backpacks for a little while now Traditionally, the French motorcycle gear manufacturer has managed the deployment of its airbags with a tether cable. The airbag was triggered when the cable detached from the bike and the vest would inflate in the milliseconds it takes to go from falling off the bike to hitting the ground.

For the past year or so though, Helite has been working on wireless sensor management for its airbags, and now, it’s bringing that tech to market. The interesting part about Helite’s solution is that It uses two sensors, one in the airbag vest itself and the other mounted on the bike’s fork.

The fork sensor claims a 32ms response time while the sensors in the vest reacts in 62ms. The fork sensor should help in lower-speed crashes and in stationary crashes where the bike is stopped and then hit by a passing vehicle. For example, being rear-ended at a stop light. It has a five-year battery life and doesn’t require any sort of connection to data or GPS servers.

Final development is still in process, and we hope the company has worked to eliminate false positives. The fork sensor might be prone to jarring from larger potholes or even roadside debris.

You can buy the Helite airbag vests with or without the fork sensor. The company says there is no point using the fork sensor on the racetrack, where speeds are higher and collision with objects less common.

I’m a personal fan of airbag suits, vests, and jackets. Improving their practicality and effectiveness by moving to a wireless, electronic detection system is a good step.

The two new models, Turtle 2 and GP Air, will be available in early 2020. The company is also working on a backpack with an integrated airbag. Pricing has not yet been announced.