Would You Ride With This Solar Canopy Over Your Electric Scooter? 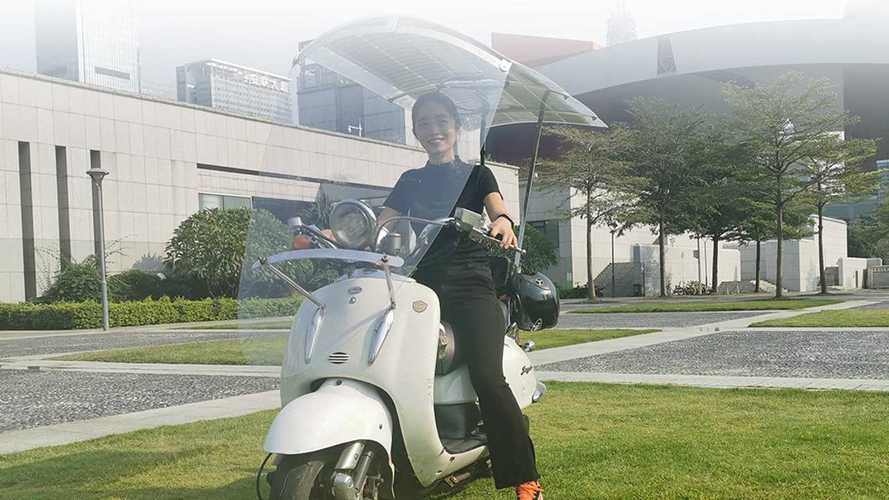 No, Google, I did not mean "Motorola."

One of the biggest obstacles to overcome for electric two-wheeler manufacturers is range anxiety. For those of us who are interested in electric motorcycles and scooters, the chasm between interest and practicality is getting smaller but it still has a decent way to go before it disappears. That’s where Chinese startup MotoSola believes it can make a difference.

Some Other Range Anxiety Approaches:

Meet The Daymak Beast 2.0 E-Scooter That Charges In 20 Minutes
⠀

The MotoSola prototype unit is a multi-layered solar awning that's mounted on top of your electric scooter. According to the company, it’s then able to continuously charge your scoot all day, whether you’re riding or parked. The company also adds that this awning can be adapted to other types of personal electric vehicles as well, including kick-scooters.

The MotoSola canopy is a working prototype at the moment. It seems that the company is gauging interest from both vehicle manufacturers and riders. There’s a form on the website you can fill out to indicate your interest, no matter whether you’re a private individual or the representative of an electric scooter maker.

The company wants to recruit manufacturers to participate in the design process so its panels are plug-and-play for vehicles. At the same time, it also seems interested in developing universal-fit solutions that can be retrofitted to existing electric scooter models.

We, of course, have a ton of questions about this. For a start, assuming that you’re cool with how the unit looks—which might be a big ask, unless you’re into looking like a two-wheeled golf cart—just how much power will these solar canopies be able to provide?

Also, while we know that conventional solar panels still work on cloudy days, will the lesser amount of power provided when it’s overcast still offer a reasonable amount of juice for your chosen electric vehicle? How well do these canopies handle exposure to the elements, including heat and cold extremes?

It remains to be seen whether this prototype will be adapted on a large scale, or become a readily available mod kit that you can install yourself on your existing electric scooter. Would you be into it if you could? What do you think?